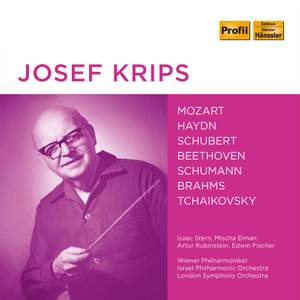 The legendary Vienna Mozart Ensemble which came into being in the early years after World War II will forever be associated with the name of the Austrian conductor Josef Krips (1902–1974). Born in Vienna, he had studied music there under Felix Weingartner, was principal violinist in the Volksoper orchestra, then Weingartner's assistant. He took posts as concert master in Aussig (now Ústí nad Labem in the Czech Republic), then Dortmund and Karlsruhe, where he was appointed General Music Director in 1926 before returning to Vienna, where in 1933 he was given the post of conductor at the Vienna State Opera. He left the country of his birth again in 1938 after the Anschluss, but in Belgrade he was prohibited from working after intervention by the Nazis. At the end of the war, Krips returned to Vienna and immediately became actively involved in the reconstruction of cultural life in the city on the Danube. His artistic and organisational skills were in demand in post-war Austria when it came to re-establishing the Salzburg Festival.