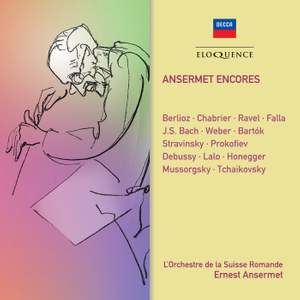 Excerpt,  Prokofiev: The Love for Three Oranges: Suite Op. 33b

IV.2. Dance of the Persian Slaves

No. 13 Waltz of the Flowers

A generous compilation of short pieces either recorded individually or extracted from the Decca discography of Ernest Ansermet. Included is a complete ten-inch LP of encores entitled ‘Orchestral Favourites’ and containing pieces by Falla, Chabrier, Mussorgsky and Debussy. This dates from October 1955, near the beginning of Decca’s stereo catalogue, whereas the rest of the compilation is taken from later recordings, up to September 1968 in the case of Lalo’s Scherzo. Ansermet died the following year, leaving behind a vast catalogue of recordings which document above all his idiomatic feeling and meticulous approach to the scores of the French and Swiss composers whom, in many cases, he knew personally: Debussy, Ravel and Honegger among them. However, Ansermet was far too complete a musician to be restricted in his sympathies to music of his own heritage, and the rhythmic verve and brilliant attack he cultivated from the Suisse Romande orchestra particularly suits Russian music such as the showpieces by Stravinsky, Borodin, Prokofiev, Mussorgsky and Tchaikovsky items on this album.

Indeed, this anthology stands as an ideal taster to the extensive catalogue of the conductor’s work for Decca, systematically reissued by Eloquence. Though his demeanour often appeared stern, his music-making could smile as well as dazzle. In works such as the Hungarian March, Espana or the Scherzo a la Russe he produced the music with a conjuror’s flourish worthy of Stokowski. With 17 tracks drawn from 11 separate recording sessions, even Ansermet aficionados will find something new here. A booklet appreciation of the conductor’s career is supplied by his biographer, Francois Hudry.

‘Not all the pieces are, in origin, orchestral, and certainly not all of them are favourites. But they very soon might be, played and recorded like this ...