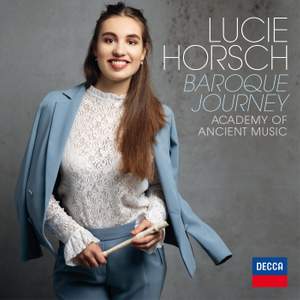 A colourful panorama stylishly and affectionately executed by all concerned. — BBC Music Magazine, May 2019, 4 out of 5 stars More…

The Arrival of the Queen of Sheba (Arr. Recorders & Orchestra)

Tollett: Divisions on a Ground

"When I am laid in earth" (Dido's Lament) (Performed on Recorder)

The astonishing 19-year-old Dutch recorder player returns to takes us on a journey around Baroque Europe, showcasing the most virtuosic music from her native Netherlands, as well as Germany, Italy, France, Spain and England Highlights from the album include Handel’s Arrival of the Queen of Sheba, Bach’s Badinerie and the world premiere recording of a concerto by Jacques-Christophe Naudot and Dido’s Lament by Purcell

For her second album, Lucie is joined by the Academy of Ancient Music who are making their first DECCA recording in over 20 years!

A colourful panorama stylishly and affectionately executed by all concerned.

Her technique was always immaculate and her tone lively and clear, but there’s been a clear growth in naturalness and confidence. Then, while, ‘Baroque Journey’ continues the entry-level theme of the earlier disc…there’s also repertoire for the ‘experts’, along with a stylistic variety that has allowed Horsch herself to shine in numerous directions.