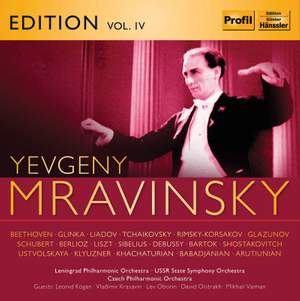 I. Awakening of Cheerful Feelings upon Arrival in the Country. Allegro ma non troppo (Live)

V. Happy and Thankful Feelings After the Storm. Allegretto (Live)

Rimsky Korsakov: Legend of the Invisible City of Kitezh and the Maiden Fevronia Suite

III. Departure of the Wedding Cortege - The Tartars' Assault

IV. The Battle of Kerzhenets

VI. Pilgrimage to the Invisible City

I. The Palace Square (Live)

Babadzhanian: Violin Concerto in A minor

Yevgeny Alexandrovich Mravinsky was born according to the Julian calendar then in use in Russia on May 22, 1903 (June 4 according to the Gregorian calendar predominant in the West), the son of an aristocratic lawyer, in the city known then and now as Saint Petersburg. Two aunts played decisive roles in the life of Yevgeny Aleksandrovich Mravinsky. The son of an aristocratic lawyer was born in St Petersburg on May 22 (according to the Julian calendar of the Russian Orthodox church, though according to the western Gregorian calendar the date is June 4), 1903. One aunt was the celebrated soprano Yevgeniya Mravina, and the little Yevgeny probably learnt something about musical theatre from her. The other aunt was Aleksandra Kollontai, and she would prove extremely useful in enabling him to follow the profession he had chosen.