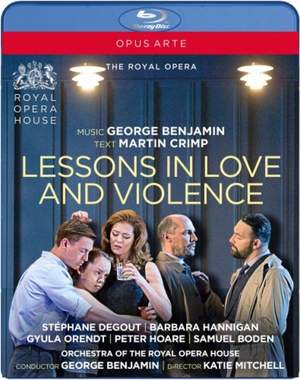 His orchestral imagination is prodigious, and both as a composer and conductor he conjures up memorable soundscapes full of jittery tension…the entire cast seems convinced it is creating something... — BBC Music Magazine, April 2019, More… 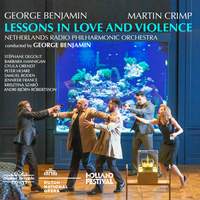 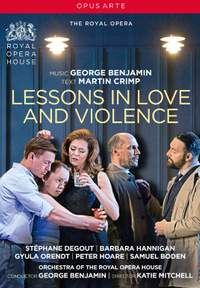 George Benjamin and Martin Crimp’s second full-length opera – following the acclaimed Written on Skin – draws on the real-life relationship between Edward II and Piers Gaveston to explore how personal relationships can have fatal political onsequences. The King lives in a close but uneasy relationship with his wife Isabel, their two children and his lover Gaveston. When the King banishes his military advisor Mortimer, he sets off a chain of devastating events.

”George Benjamin and Martin Crimp have done it again. Six years after their previous operatic collaboration, the masterly Written on Skin, Mr. Benjamin and Mr. Crimp have again dared to challenge audiences by remaining true to their uncompromising visions. In Lessons in Love and Violence, (…) the music, written and compellingly conducted by Mr. Benjamin, is unapologetically modernist, while the libretto, by Mr. Crimp, is often cryptic. Without pandering, they’ve made another significant contribution to the art form.” The New York Times

‘‘His [George Benjamin's] music, like Crimp’s words, is at once brilliantly clear and full of half-suggested meanings. Debussy’s Pelléas et Mélisande lurks in the background, a benign influence casting rays of light into this world of moral darkness. Although Benjamin does not write conventional arias, it seems there is barely a line that this cast does not shape with beauty and expressiveness.’’ The Financial Times ****

His orchestral imagination is prodigious, and both as a composer and conductor he conjures up memorable soundscapes full of jittery tension…the entire cast seems convinced it is creating something deeply meaningful…Peter Hoare’s scheming Mortimer is the most compelling of all…But the work really needs to be set free from its creators.

At just 90 minutes, this is an opera of impressive concentration with not a word or note wasted…In the telling of this oppressive story Benjamin and Crimp are as one. Like Crimp’s text, the music is a model of clarity on the surface, while suggesting an undercurrent of evil…Everyone in the cast fits perfectly…Hannigan is outstanding as the Queen.

A magnificent production of a superb new opera - hold your nerve and buy it at once.

Benjamin’s score is constantly arresting, its sense of dramatic pace, development and architecture fabulously judged, its moving and impactful unfolding delivered by way of an extraordinarily powerful sound fabric…Crucially, the DVD never lets one forget that one is watching a film, not sitting in the opera house. And its cinematic values are impressive; they also mesh brilliantly with the choreography of Katie Mitchell’s staging and with Vicki Mortimer’s designs.

As in Written On Skin, much of the work’s disturbing beauty lies in Benjamin’s ability to switch from sensuality to brutality in a heart-beat, and the contrast between Crimp’s economical language and Benjamin’s rich, endlessly imaginative orchestration is also common to both works...The cast embrace their dramatically and musically challenging assignments with blazing commitment, sensitively directed by Katie Mitchell in a production which works every bit as well on screen as it did on stage.