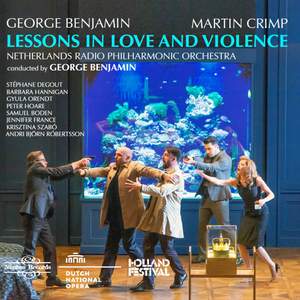 The singing—and the orchestra, conducted by the composer himself—is flawless...powerful singing and a balanced execution of sound give voice to a dramatic libretto and an arresting score, making... — Fanfare, January/February 2020 More…

Part 2, Scene 7: II. Let Me Explain To You The Entertainment

Lessons in Love and Violence is an opera with music by George Benjamin and text by Martin Crimp. The opera, which is based on the story of King Edward II and Piers Gaveston and covers the events set out in Christopher Marlowe's play Edward II, which combines the story of Edward and Gaveston with the deposition of Edward II by Mortimer and the overthrow of Mortimer and Edward's queen Isabella of France by Edward III. The opera is in two parts, of four and three scenes respectively, and is performed without a break. The opera was co-commissioned by the Royal Opera Covent Garden London, the Dutch National Opera Amsterdam, Staatsoper Hamburg, Opera de Lyon, Lyric Opera of Chicago, Gran Teatre del Liceu, Barcelona and Teatro Real Madrid. This production was recorded by the Dutch National Opera in June and July of 2018.

The singing—and the orchestra, conducted by the composer himself—is flawless...powerful singing and a balanced execution of sound give voice to a dramatic libretto and an arresting score, making this a truly operatic tour de force.

The music is wonderfully inventive and varied, written for a larger orchestra than before, though not huge, and with an interesting emphasis on bass instruments... Nimbus have again done Benjamin proud.