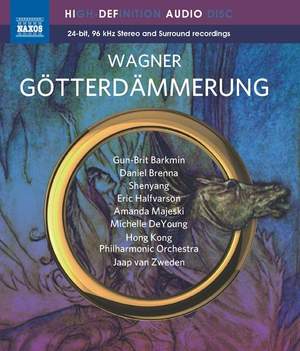 Barkmin brings imagination and flair. It’s quite a ‘white’ voice and not a huge one but she’s a committed projector of the drama. Brenna’s voice, again not heavy but well focused, certainly records... — Gramophone Magazine, November 2018 More…

As the final instalment of the cycle on Naxos is released, the conductor talks to Katherine about the project's origins, and the challenges and rewards of tackling Wagner's epic with an orchestra whose primary home is the concert-hall rather than the opera-house.

Götterdämmerung brings to a conclusion the Naxos Ring Cycle conducted by Jaap van Zweden with the Hong Kong Philharmonic Orchestra. As with the other releases in this edition, it will appear both on standard CD and Blu-ray formats. Previous releases in this cycle have been received with great critical acclaim. "The quality of the orchestral playing is remarkable… The cast is uniformly strong, and the audio quality is superb." (ClassicalCDReview.com on Das Rheingold): "Van Zweden seems to respond more naturally to this richer, more passionate score, better suited to his sweeping approach. Drawing airy, luminescent textures from the Hong Kong players, he drives the drama excitingly…" (BBC Music Magazine on Die Walküre). Götterdämmerung (Twilight of the Gods) is the epic fourth and final opera of Wagner's great Ring cycle, with a plot that depicts the fall of heroes, gods, and the entire world. Containing all of the Ring's essential elements, Götterdämmerung possesses a profoundly satisfying sense of inevitability that makes it both a towering climax and a unified summation of the Ring's abundant variety.

Barkmin brings imagination and flair. It’s quite a ‘white’ voice and not a huge one but she’s a committed projector of the drama. Brenna’s voice, again not heavy but well focused, certainly records comfortably and he is always fully in touch with the dramatic requirements. Eric Halfvarson’s Hagen, more experienced than this pair, is both vicious and frightening…There’s little dull here, it always sounds good and it could make for an ideal economic first-time listen to the work.

There’s a real sense of continuity, of broad spans, to van Zweden’s conducting. There’s also a meticulous attention to detail, and the recording manages to achieve that elusive combination of transparency and depth of sound to the orchestral playing…A largely decent and rewarding recording, then, even if some of the casting leaves one wishing for more.

Orchestrally at least, the climax to this Ring, which began four years ago with a promising Rheingold, is magnificent. Van Zweden is a symphonic Wagnerian, teasing out rarely heard details from the score in the great orchestral set pieces. Vocally, it’s mixed.

[van Zweden] deserves an award for steering his players through initially unfamiliar music with such a firm hand and sustained panache...Trophies should equally go to the musicians for their warmth, robustness and precision. When the horns call out before Siegfried’s fateful return to the Rhine forest in Act II, or in the Act III prelude, you’re hearing one of the best Wagner orchestras in the world.

This splendid Blu-ray Audio release from Naxos captures all the excitement and energy of this revolutionary music.

This van Zweden Ring should be in every Wagner collection.