When plans were announced for a new recorded Ring Cycle back in 2014, I don’t think any of the Presto team expected it to come courtesy of either Naxos or the Hong Kong Philharmonic – Wagner hadn’t figured in the orchestra’s repertoire by that stage, and though the label had issued some impressive historical Wagner recordings over the years, this kind of project seemed rather a departure from the norm for them too. But it’s turned out to be a Ring Cycle that’s well worth hearing, not least for the hugely impressive orchestral playing and sure-footed direction of the Dutch conductor Jaap van Zweden; as the final scorching instalment arrived last week, I asked him how he went about turning the Hong Kong Philharmonic into ‘a really first-class opera orchestra’, and the pros and cons of recording the cycle live in concert at one-year intervals…

This was the Hong Kong Philharmonic’s first encounter with The Ring Cycle – how did the project come about?

The driving forces behind the project were Michael [MacLeod, Chief Executive of the Hong Kong Philharmonic], myself, and YS Liu [chair of the orchestra's Board of Governors]; of course Klaus Heymann [the founder and head of Naxos] was involved a little bit later, because we only wanted to do a Ring Cycle if we could also record the entire thing. Then of course we had to set about making it actually happen: we approached the Hong Kong Government*, who stood behind us 100% in terms of emotional support as well as financial backing, because if anything was expected from the Hong Kong Philharmonic it was not a Ring Cycle, which is exactly why we wanted to do it! We all (and I especially) really believed in the quality and potential of this orchestra, and their ability to pull off something on this scale, so this was our chance to shake things up a little bit!

What were the pleasures and challenges of working on this music with a blank slate rather than with an opera orchestra?

It was, of course, a risk for an orchestra that isn’t even 45 years old to attempt to create that Wagnerian sound-world. The Hong Kong Philharmonic had already played some opera when we started the project, but to pull off the Ring Cycle you need to be extremely flexible and understand a completely different kind of music-making. Then of course the story behind these operas is quite involved, and each individual player needs to understand at least a little bit about what is going on. An opera orchestra have an additional flexibility that comes from doing this music for years and years, but to transform the Hong Kong Philharmonic into a really first-class opera orchestra was not so difficult because everybody was so behind it - all the players passionately wanted to enter into that world, and really threw themselves into working with so many different singers, so the transition felt like a very natural thing.

The players face different difficulties to those they encounter in a symphony: for instance, whenever you have a singer there you simply can’t give 110 % of your volume – the voices should always win! Especially in The Ring, it isn't always easy to resist the urge to overplay and risk overpowering the singers, and that was a challenge that I would say took a few months to really nail. But it’s a pleasant challenge, because as a player you want to hear the voices and the story they’re telling, so whenever you’re tempted to give your maximum you need to keep in the back of your head and heart that the singers must be heard.

Another challenge is that singers are never the same – every night is different! If they push the tempo forward or scale down the volume in the heat of the moment, an orchestra needs to respond quickly. That was a challenge we knew about before we started, and even though we only played each opera in two concerts we allowed a great deal of rehearsal-time for the players to adapt to this. And then the last but I think the most important step was to cultivate intensity of sound rather than just volume, because you want to create the impression of the orchestra being a pit with the singers above; if you want to replicate that balance in a concert-venue where everyone's on one level, then you need to play a little bit softer but more intensely than if you were doing a symphonic concert.

How different is the experience of conducting The Ring in concert (ie without any visual means to convey Wagner’s many and varied stage-directions) to doing so in the opera-house?

In October 2017, we also did a staged Walküre in Beijing, which was interesting in that the players got to experience this music from the pit - but then you have an additional layer of difficulty in that the singers are having to divide their attention between the music and the acting. Wagner’s music-dramas are made for the eyes as well as the ears, of course, so I’m glad that we had that experience of being in an opera-house - but I’m also very happy that they didn’t take a recording from that performance, because I wanted the orchestra and singers to be able to focus 100% on the music. There was no acting in the concerts, and I think that’s the best thing for a recording.

How was the acoustic in the Hong Kong Concert Hall, and how did it affect your choices regarding balance and tempi?

It's my belief that we should never adjust to a hall – we just adjust to our ears, to what we hear inside, and focus on what we want to hear. Whether a hall is the best in the world or something a little less than that isn't important to me: we have to create our own acoustic. But throughout this project we had [producer and sound-engineer] Phil Rowlands on hand, who really knows how to create the right sound on record and capture a performance faithfully: I must say that this partnership with him and his team has had a tremendous impact on what we achieved here.

You have three different Brünnhildes and two Siegfrieds: was that simply down to scheduling issues, or (given the quite different vocal requirements of the three Brünnhildes in particular) a deliberate aesthetic decision?

That was really down to people’s availability rather than an artistic choice, because in all honesty we were a little late in planning this whole thing! But from the outset I was really keen to have a mixture of big names and upcoming singers: you should not only have people who are tackling this music for the first time, and you should not only have people who’ve sung it 100 times! For instance, our Brünnhilde in Götterdämmerung [Gun-Brit Barkmin] is already, for my taste, one of the great singers of the moment, and everybody is really excited about this new voice: we were very lucky to find somebody who was doing this role for the first time, and will go on to sing it for many years to come. It also makes me proud that this project has taken on a sort of entrepreneurial dimension in searching for new voices and new talents, and giving singers who aren’t yet world-famous an opportunity to present themselves on a major recording. But it was ultimately all born of availability, so it was a great coincidence!

Was it a challenge to keep the impetus going with performances so far apart, or were there compensations in terms of recovery-time?

After a twelve-month break it sometimes took the orchestra a good while to tap into that real Wagner sound again - though that happened much faster with Siegfried and Götterdämmerung than when we went into Walküre a year after Rheingold! To use a visual metaphor, Wagner works a lot with oil-paints, so we needed to conjure up a palette of really dark, beautiful, rich sounds, and if you’ve been doing programmes of French or Russian music in between the operas it's not so easy to switch back to those colours. But we programmed it like this because we really wanted to make a statement every year: we always did the concerts in January, when people are refreshed after the Christmas vacation and able to prepare well! But I think if we tackle this again, maybe we’ll do the four operas a bit closer together: my ideal would be to do The Ring over a period of a few weeks, and hopefully we’ll get the chance to do that at least once!

*The Hong Kong Philharmonic stated that the project 'received significant support from the Hong Kong Government, under the Contestable Funding Pilot Scheme offered by the Home Affairs Bureau'. 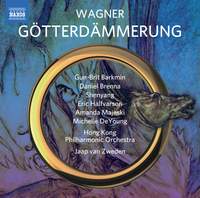 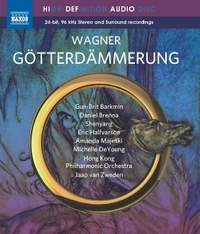 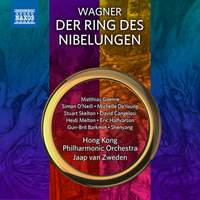