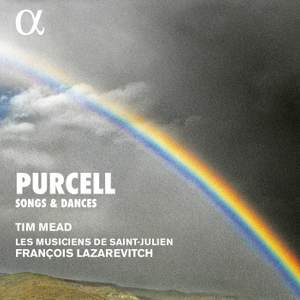 Mead began as a choral scholar in England and is known for his clear diction and vocal poise, while Lazarevitch studied in Paris and Brussels, and has an eclectic approach to instrumental performance,... — BBC Music Magazine, January 2019, 4 out of 5 stars (Performance) / 5 out of 5 stars (Recording) More…

"What Power Art Thou"

Purcell: If ever I more riches did desire Z544

If Ever I More Riches Did Desire, Cantata, Z.544: "Here Let My Life With as Much Silence Slide"

Purcell: Fantazia Upon a Ground, Z.731

Les Musiciens de Saint-Julien, guided by François Lazarevitch’s virtuoso flute, have already led us along the roads of Ireland and Scotland, notably the High Road to Kilkenny, a great success in 2016. This time, they venture into England with an essentially secular programme devoted to Henry Purcell (1659-95), varying the mood by alternating between instrumental dances and songs performed by the English countertenor Tim Mead, including ‘O Solitude’ and ‘What power art thou’. While Les Musiciens de Saint-Julien have chosen these celebrated pieces for pleasure above all, with this English programme they also fill in a new piece in their jigsaw map of the United Kingdom. At the same time, they demonstrate the musical porosity of Ireland, Scotland and England – and the atypical colors of the small string ensemble complemented by two flutes, a harp and harpsichord/lute continuo further underline the fact. The common thread, dear to Les Musiciens de Saint-Julien, is that of folk music lying at the heart of art music, in a mixture of origins, practices and repertories. We can easily recognize ‘Scotch and Irish tunes’ that Purcell incorporates in his overtures, jigs, hornpipes and chaconnes. The countertenor Tim Mead punctuates the dances with songs composed for the operatic or dramatic stage or for chamber performance.

Mead began as a choral scholar in England and is known for his clear diction and vocal poise, while Lazarevitch studied in Paris and Brussels, and has an eclectic approach to instrumental performance, drawing on popular and ‘folk’ styles. At one level the combination works well.

[Mead’s] singing radiates rich colour, smooth lyricism and exquisite melancholy…Yet the most striking aspect of these performances undoubtedly lies in the instrumental music, full of life and colour…This disc is a hugely enjoyable Purcellian celebration

Reactions to this absorbing and revelatory disc will, I suspect, depend on how one responds to the “Frenchified” Purcell of François Lazarevitch’s Saint-Julien musicians. I heartily approve of their imaginative, improvisatory approach, which brings some of the instrumental music...close to the realms of their speciality, Celtic folk music.