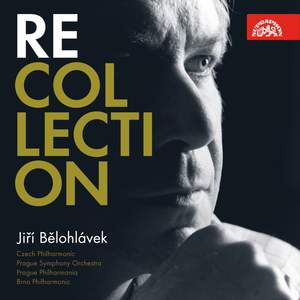 IV. From Bohemian Fields and Groves

I. About the Faithful Love of Radúz and Mahulena and Their Sorrows. Adagio, ma non troppo

II. The Game of the Swans and the Peacocks. A la polka

IV. Runa´s Curse and How It Was Broken by Love. Allegro appassionato

I. The Death of Andrei

II. The Death of Ostap

III. The Prophecy and Death of Taras Bulba

I. The Parable of a Sculpture. Andante pastorale

II. The Parable of a Garden. Poco moderato - Allegro molto

III. The Parable of a Navire. Poco Allegro

This collection from the legacy of Jiří Bělohlávek (1946-2017) was put together during the year after the demise of this outstanding conductor. It is intended mainly as a recollection of this extraordinary musician and person. His life can be briefly described by enumerating the greatest of his achievements (Chief Conductor of the Czech Philharmonic, BBC Symphony Orchestra, guest conductor with the Berliner Philharmoniker, New York Philharmonic, Royal Concertgebouw, appearances at the MET, Glyndebourne, etc.; holder of the Commander of the Order of the British Empire /CBE/ title). The Maestro himself may have preferred asharing of memories to recordings; yet the set of twenty-three pieces taken from the almost three hundred pieces from Supraphon archives and recorded in the years 1971 – 2016 is a wonderful illustration of Bělohlávek’s professional maturing. They capture him as a conductor of several leading Czech orchestras, beginning with the Brno Philharmonic Orchestra (the energetic performance of Janáček of 1977 appearing at a CD for the first time) and concluding by the Czech Philharmonic and Prague Philharmonia. In the very centre of Bělohlávek’s repertoire we find compositions by Dvořák (From the New World), Smetana (My Country), Suk, Janáček and, notably, Martinů, whom he introduced to the world. The collection is enriched by several side-steps into other areas of repertoire including Mozart, Ravel, Mahler and Bartók, which documents the amazing scope of the conductor’s focus. Please accept our invitation to an encounter with Jiří Bělohlávek who loved music above anything else and served it with the loyalty of a knight till the very end.