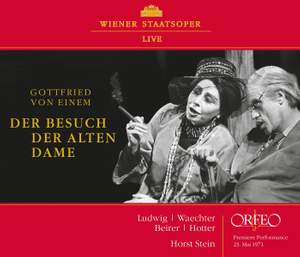 The 'tragic comedy' recorded here goes back to the middle of the twentieth century and is based on a work by an author who was of the view that 'a story is only fully thought through when the plot has taken a turn for the very worst', and who as a result decided that he could only write comedies. The pleasant simplicity of the language, the entertaining, apparent harmlessness of the plot, as manifested in the comic-like names of some of the protagonists, such as Toby, Roby, Koby and Loby, are in the sharpest possible contrast to the unmatched cruelty of the concept and action of the characters – that is to say, an utterly excessive, archaic campaign of feminine revenge. It is therefore quite appropriate that the composer, born 100 years ago, was no pioneer, any more than his librettist, of a bombastic avant-garde style that took itself too seriously. On the contrary, the unfathomable aspect of these merciless events is emphasised here by means of a clearly comprehensible and not entirely unentertaining approach. The premiere at the Vienna State Opera in 1971 was an unprecedented success that, according to the reviews, by far outshone popular repertoire opera premieres of previous years, and the production staged by Otto Schenk enjoyed a run of 39 performances. That success was no doubt thanks in part to its cast: accompanied by the Vienna State Opera Orchestra under Horst Stein, a first-rate ensemble with Hans Hotter as the teacher, Eberhard Wächter as the lamentable Alfred Ill, and above all, the outstanding Christa Ludwig as the richest woman in the world, Claire Zachanassian. Her name, according to the original play’s author Friedrich Dürrenmatt, is a conglomerate of Zacharoff, Onassis and Gulbenkian, and one might easily conclude that the lady whose birthday we are marking commands similar riches, embodying as she does the qualities of several top-flight singers. The artist, who will celebrate her ninetieth birthday this year, has contributed to the CD booklet notes personally, providing memories of the production, which are further proof of the magnitude of her artistic personality.