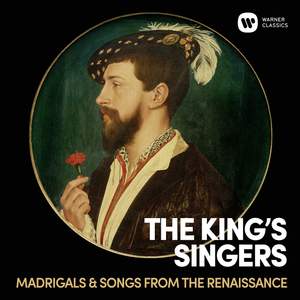 The King's Singers: Madrigals & Songs from the Renaissance

Byrd: Who made thee Hob forsake the plough?

Bartlet: Of all the birds

Tomkins: Too much I once lamented

Morley: Now is the month of maying

Lasso: In pace in idipsum

Tallis: The Lamentations of Jeremiah

Morley: Balletts to Five Voyces, Book 1: No. 4 Sing We and Chaunt It

Morley: Madrigals to Foure Voyces: No. 22 On a Fair Morning

Wilbye: The Second Set of Madrigales: No. 20 Oft Have I Vowed

Dowland: The Third Booke of Songes: No. 7 Say, Love, if ever Thou didst find

Weelkes: Ballets and Madrigals, Volume 1: No. 1 All At Once Well Met Fair Ladies

Farnaby, G: Canzonets to Four Voices: No. 20 Construe My Meaning

Weelkes: 26 Ayeres or Phantasticke Spirites: No. 15 Lord, When I Think

Morley: Canzonets or Litle Short Aers to Five and Six Voices: No. 12 Cruel, Wilt Thou Persever

Dowland: The Second Book of Songes: No. 12 Fine Knacks for Ladies

Weelkes: 26 Ayeres or Phantasticke Spirites: No. 18 Strike it up, Tabor

Jones, Robert: The First Booke of Songes or Ayres : No. 12, Farewell, Dear Love

Pilkington: First Set of Madrigals: No. 12 Have I Found Her

Wilbye: The First Set of English Madrigals: No. 15 Lady, Your Words Do Spite Me

Georges Kirbye: The First Set of English Madrigalls to 4, 5 and 6 Voyces: No. 14 Why Should I Love?

Byrd: The First Sett of Italian Madrigalls Englished: No. 28 This Sweet and Merry Month of May

Morley: Balletts to Five Voyces, Book 1: No. 3 Now is the Month of Maying

Morley: Canzonets or Little Short Songs to Three Voyces: No. 23 Though Philomela Lost her Love

Wilbye: The Second Set of Madrigales: No. 27 O Wretched Man

Bennet: Madrigalls to Fovre Voyces: No. 13 Weep, O Mine Eyes

Wilbye: The First Set of English Madrigals: No. 24 Cruel, Behold My Heavy Ending

Farmer: First set of Madrigals to 4 Voices: No. 14 Fair Phyllis I Saw Sitting All Alone

In 1968, six former choral scholars from King’s College, Cambridge established the King’s Singers, later described by The Times as “the superlative vocal sextet”. The group has always comprised two countertenors, a tenor, two baritones and a bass, and over the years it has proved consistently exceptional for vocal distinction and breadth and diversity of repertoire. This celebratory collection of eight CDs focuses on Renaissance composers from Italy, England, France, Spain, Germany and the Low Countries.