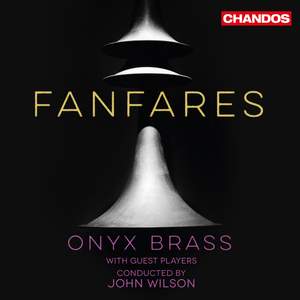 Howells: Fanfare for Schools (arr. for brass ensemble and percussion)

Arnold: Fanfare for a Royal Occasion

anon.: Great Britain [God Save the Queen, "God save our gracious Queen …"] (arr. A. Bliss for brass ensemble)

God Save the Queen (Arr. A. Bliss for Brass Ensemble)

Bliss: The Right of the Line Fanfare

Bliss: Fanfare for the Princess Anne

Bliss: A Salute to Painting Fanfare

6 Brilliant Fanfares: No. 1 "Fanfare for a Dignified Occasion"

Holst, I: Fanfare for Thaxted

Holst, I: Fanfare for the Grenadier Guards

Ketèlbey: Fanfare No. 1 for a Naval Occasion

Ketèlbey: Fanfare No. 2 for a Naval Occasion

Ketèlbey: Fanfare for the Royal Artillery

Ketèlbey: Fanfare for a Ceremonial Occasion

6 Brilliant Fanfares: No. 5 "Fanfare for a Merry Occasion"

Lutyens: Fanfare for a Festival

Bax: Fanfare for a Cheerful Occasion

Among all the many Chandos brass recordings, each release having played a major role in the label’s successful history, this one may well be the loudest. In the vast acoustic of St Jude’s Church, London, rendered in surround-sound, and in the largest ensemble format to which it has ever expanded, Onyx Brass, under the energetic direction of John Wilson, brings together four dozen fanfares by fourteen British composers of the past century and a half. Including works by Arnold, Bax, Bliss, Imogen Holst Ketèlbey, and Tippett – with numerous premiere recordings, this album is an unmissable celebration of stirring, brilliant, joyous, exciting, varied, sometimes military, and always optimistic music.