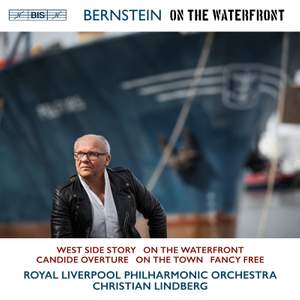 Offer, Bernstein: On The Waterfront

They’re completely on fire, chiselling hot rhythms out of the percussion, melting their lips on ritzy brass cascades. They also obviously relish the tenderness of those rare moments when Bernstein... — BBC Music Magazine, July 2018, 4 out of 5 stars More…

I. Andante (With Dignity) [Live]

1944 saw the premiere of the ballet Fancy Free, 25-year old Leonard Bernstein’s first major composition as well as the first in a string of scores for the stage and film. In order to celebrate the centennial of Bernstein’s birth in 1918, Christian Lindberg has gathered music from five different productions spanning a period of 13 years – from Fancy Freeto the iconic musical West Side Story, premiered in 1957. The disc is bookended by the sparkling and witty Overture to Candide and Three Dance Episodes from the musical On the Town.

Also included is the substantial Symphonic Suite from ‘On the Waterfront’, developed by Bernstein from the score he wrote for Elia Kazan’s classic film. The drama of this tale of love and betrayal set amid the docks of Hoboken in New Jersey is brought out by Bernstein’s music, which seethes with dramatic tension. Making its first appearance on BIS in these flamboyant and life-enhancing scores, the Royal Liverpool Philharmonic Orchestra clearly relishes the opportunity to let its collective hair down. The players are egged on by Lindberg, known for his ability to energize both orchestras and audiences.

They’re completely on fire, chiselling hot rhythms out of the percussion, melting their lips on ritzy brass cascades. They also obviously relish the tenderness of those rare moments when Bernstein relaxes (relatively speaking), as in the West Side finale and ‘Somewhere’…[Lindberg] shows his mettle as a conductor, keeping the ensemble light, tight, always on the ball…But the testosterone and energy levels remain dauntingly high.

The Royal Liverpool Philharmonic put on such a good show throughout this disc. The Symphonic Dances from West Side Story find them rounding corners that challenge the very best big bands...The all-dancing aspects of the disc do Bernstein’s struttin’ NYC style proud.

Make no mistake, this newcomer will get your toes tapping...every bit as memorable as it is under the composer himself…so, who’s it to be – Lenny or Lindberg? Frankly, I’d want both

Lindberg brings out the balletic elements in all four of the substantial works on this collection: the simmering menace of the West Side ‘gangs that dance’ (with apologies to Frasier Crane) is overlaid with an urbane grace that’s markedly different from Bernstein’s own rough-and-ready approach, and the final stretches of the Andante from the On the Waterfront suite shimmer like Ravel’s score for Daphnis et Chloé.

A spirited survey...A reason to choose this over another Bernstein compilation – though the crisp, taut playing of the RLPO is cause enough – is the inclusion of the symphonic suite from On the Waterfront

As should by now be clear, this is a Bernstein centenary album certainly worth snapping up. Superb BIS recording too, demonstration- worthy in its naturalness of timbre, lustrous glow and intrepid range of dynamics.

The Arts Desk 19th May

Lighter fare comes in the shape of the dance episodes extracted fromOn the Town– gloriously perky, with an unmatched clarinet in the third dance. Plus three short numbers from the balletFancy Free. Beautifully done.

Lindberg and Liverpool Philharmonic capturing the menace of Bernsteins soundscape with some excellent playing on this vivid recording…a lovely affectionate swing through the dances...Lindberg and Liverpool Philharmonic bring another dimension, a clear, slightly more classical approach which I think pays dividends……on the Waterfront is the highlight of this fine recording on the BIS label.