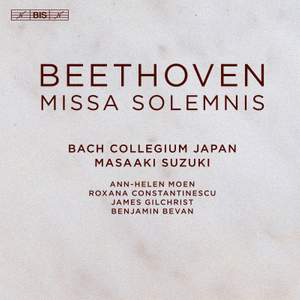 The orchestra and chorus are comparatively small under Suzuki, the tempos slightly on the fast side, the soloists able to cope with the appalling difficulties of their music, but not outstandingly... — BBC Music Magazine, June 2018, 4 out of 5 stars More…

The Japanese conductor and early-music expert talks to David about his recent recording of Beethoven's mighty Missa Solemnis with the Bach Collegium Japan.

Beethoven began composing the Missa solemnis in 1819, when he learned that his patron (and pupil) Archduke Rudolph was going to be appointed Cardinal Archbishop of Olmütz. The plan was for the mass to be ready for performance at the enthronement celebrations in March 1820, but one year proved to be too little time. It wasn’t until almost three years later, in January 1823, that Beethoven was able to complete the work.

As might be expected, it was unparalleled in every respect – although composed for use during church services, even Beethoven’s contemporaries found that it exceeded the bounds of the genre. Beethoven himself was quite aware of both the dimensions and the importance of the work: in a letter he described it as ‘my greatest work’. It is also a work which over its course encompasses great contrasts: from the solemnity of the Kyrie and the intense excitement at the opening of the Gloria to the disturbing intimations of war during the closing Dona nobis pacem.

Originally founded with the aim of performing the choral works of Bach, the Bach Collegium Japan and Masaaki Suzuki are now taking another great leap, after their recent release of Mozart’s Great Mass in C minor. Described as ‘refreshingly open-hearted, spontaneous and natural’ their interpretation received a 2017 Gramophone Award. Joined by an eminent quartet of vocal soloists, the team now applies its expertise in period performance to Beethoven’s masterpiece.

The orchestra and chorus are comparatively small under Suzuki, the tempos slightly on the fast side, the soloists able to cope with the appalling difficulties of their music, but not outstandingly beautiful…I suspect that Beethoven would have approved of Suzuki’s intransigence, so like his own, but whatever is the polar opposite of easy listening, this is it.

Beethoven’s primary concern when writing his Mass was to interpret the liturgical text with precision and to convey its meaning to the audience. Masaaki Suzuki’s insightful reading of the score certainly does that. Thoughtful and exhilarating, it carries the listener along on a great wave of sound. His soloists are well chosen and the singers and orchestra maintain the highest standards. There is so much clarity that comes out of this reading, from the fresh voices of the singers to the precise articulation of the orchestral playing. Highly recommended.

Suzuki’s successes with [the piece] seem to come principally from his keen ear and personal charm. For those who find weightier performances daunting (and nothing wrong with that!), this friendly account is certainly worth hearing, but in the wider context it leaves much unsaid.

Despite the relatively small instrumental and choral forces (just over thirty singers and four desks of first and second violins), the momentum never slacks, and the energy is relentless in the best possible way...Though this is very much an historically-informed performance (using gut strings and relatively straight-toned voices), it’s also one in which the uncanny modernity of Beethoven’s writing springs to the fore.

The performance has warmth, energy and an exact feeling for tempo. The Japanese chorus rise fearlessly to Beethoven’s demands. A memorable musical and emotional experience.