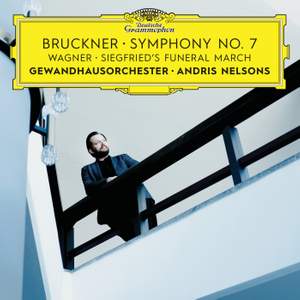 What elevates these performances for me is the fact that Nelsons takes equal care over the string parts...Having said that, the brass certainly don't disappoint either: the outbursts of the slow... — James Longstaffe, Presto Music, 20th April 2018 More…

2018 will be branded as “Gewandhausjahr”: Gewandhausorchester celebrates its 275th birthday and the inauguration of Andris Nelsons as new Gewandhauskapellmeister.

39 year-old conductor Andris Nelsons takes on the prestigious position as the 21st Gewandhauskapellmeister, kicking-off this new era with concerts during the Festival in Leipzig from 19 February to 11 March 2018.

Bruckner’s 7th Symphony had its world premiere in 1884 under Artúr Nikisch – so it’s no surprise that the 7th Symphony is on the program of Andris Nelsons’ inauguration and the orchestra’s anniversary concerts!

By including selected instrumental works by Wagner in the Bruckner Symphony Cycle, his idea is to demonstrate the influences but more importantly their differences, for clearly the two men could not have been more disparate in character.

This second ambitious long-term recording project is consciously combined with the production of DG’s first complete Shostakovich cycle that Andris Nelsons is recording with the Boston Symphony Orchestra which has already been awarded with two Grammys as well as various other awards.

What elevates these performances for me is the fact that Nelsons takes equal care over the string parts...Having said that, the brass certainly don't disappoint either: the outbursts of the slow movement of the Seventh are handled extremely well, with a beautifully-paced series of cadences that culminates in an ecstatic climax.

His Bruckner is by no means impulsive — though there is tremendous momentum in both scherzos and the “Bewegt” (with movement) finales. But, like most great Brucknerians, Nelsons sees the slow movements as key to the composer’s symphonic mastery and faith.