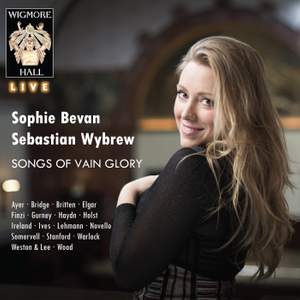 This beautifully programmed recital will make you want to rush out and buy as many volumes of British songs as you can…the real showstoppers are the lovingly rendered wartime lollipops, steeped... — BBC Music Magazine, May 2018, 4 out of 5 stars More…

Finzi: Till Earth Outwears, Op. 19: VI. At a Lunar Eclipse

Somervell: To Lucasta, on Going to the Wars

Franck Bridge: Tis but a week

Nat D.Ayer: If I were the only girl

Elgar: The Fringes of the Fleet: III. Submarines

Lehmann, L: When I am dead, my dearest

Franck Bridge: Come to me in my dreams

With each season soprano Sophie Bevan grows in artistic stature and when taking breaks from her distinguished operatic career, she has always felt supremely comfortable performing songs. Her enduring partnership with Sebastian Wybrew began as students at the Royal College of Music and this, their debut release on Wigmore Hall Live, captures her beguiling artistry and astonishing vocal gifts.

A recital to commemorate the anniversary of the beginning of the First World War, Songs of Vain Glory draws from a wider range of songs in English depicting the excitement, disillusionment and peace of those who must leave to fight and the love, fear and loss of those left behind. From the timeless, astral perspective of Finzi's 'At a lunar eclipse' to the oceanic depths of Elgar's 'Submarines' and the cosy evergreen 'We'll gather lilacs'.

This beautifully programmed recital will make you want to rush out and buy as many volumes of British songs as you can…the real showstoppers are the lovingly rendered wartime lollipops, steeped in nostalgia, underlaid with sorrow and loss…[Bevan’s] sound is glorious, perfectly matched by Sebastian Wybrew’s tremendous versatility and sense of colour.

Ivor Novello’s We’ll Gather Lilacs and Haydn Wood’s Roses of Picardy sound poignantly lovely, thanks to Bevan’s bright but soft-edged soprano and Wybrew’s understated decoration. The recording captures the rapt attention of the audience in the hall.