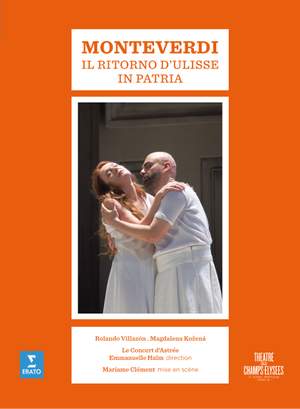 Clément’s ‘pop vision’ of the opera muddles historical periods and genres in an attempt to convey the work’s timeless universality…Among the chaos, Magdalena Kožená retains her dignity, pouring... — BBC Music Magazine, June 2018, 3 out of 5 stars More…

A highlight of the 2016-17 season at the Théâtre des Champs-Elysées in Paris was this colourful and imaginative production of Monteverdi’s Il ritorno d’Ulisse in patria (The return of Ulysses to his homeland), conducted by Emmanuelle Haïm, directed by Mariame Clément and starring Rolando Villazón as the Ancient Greek warrior Ulisse and Magdalena Kožená as his patient wife Penelope. As the French website Culturebox wrote: “The full richness of Monteverdi’s work is revealed.”

Reporting on the production at the Théâtre des Champs-Elysées, the Financial Times wrote: “Monteverdi’s 1640 opera has everything: humour, passion, horror, politics, violence and plenty of gore. Emmanuelle Haïm and her Concert d’Astrée are right at home with this music, giving it a refined, cultivated account full of precision and nuance. Mariame Clément brings a wealth of experience to the direction, which is full of well-crafted detail.” Clément took a characteristically eclectic approach, combining Classical Greek, Baroque and contemporary elements. As Opera magazine described it: “Clément housed the gods in the ‘Olympus Bar’ in a niche set high at the back of the stage, where they drank and played darts. Neptune looked like Tintin’s friend Captain Haddock and Iro was an overweight, hamburger-munching tourist in bermudas, while the shepherd Eumete became a street-cleaner. At one point banners carrying comic-strip onomatopoeia descended from the flies, and the palace in Ithaca was adorned with a soft-drinks dispenser.”

Clément’s ‘pop vision’ of the opera muddles historical periods and genres in an attempt to convey the work’s timeless universality…Among the chaos, Magdalena Kožená retains her dignity, pouring heady ardour into the role of Penelope…Haïm conducts with real vim, coaxing animated, sharply articulated playing from her period ensemble as well as moments of seductive interplay between voices and instruments.

Magdalena Kožená is an excellent Penelope, worth fighting over, with her restrained public face and her passionate private outpourings, all perfectly vocalised and enunciated. The supporting cast is excellent and Emmanuelle Haïm conducts from the keyboard and engages with stage and pit with gusto.