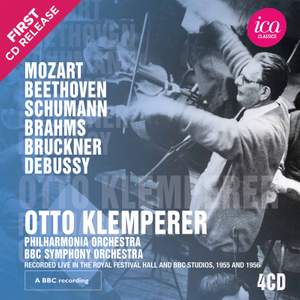 Klemperer’s Mozart may sound a bit heavy-handed and brusque…On the other hand, the performances are refreshingly direct, projecting exemplary clarity of texture with the wind instruments rally... — BBC Music Magazine, February 2018, 3 out of 5 stars More…

This release has been sourced from the Richard Itter archive. After 12 years of negotiation starting in 2005, ICA Classics have signed an exclusive long term agreement with the Lyrita Recorded Edition who are responsible for Richard Itter Trust. The collection is very important for collectors because it has never been released before onto the market.

Despite there being a large number of Otto Klemperer recordings on the market, these Richard Itter tapes of live broadcasts from the Royal Festival Hall and the BBC’s Studios in Maida Vale between 1955 and 1956 have never, as far as is known, been released before.

Klemperer was always more exciting when caught live and had added urgency as compared to his studio accounts, particuarly at this time before his health deteriorated in later years. His Philharmonia concerts were hugely successful in the mid 1950s when Walter Legge was looking to replace Herbert von Karajan, who was in the process of leaving for the Berlin Philharmonic. As Richard Osborne states in his notes, ‘The winter of 1955-56 marked a new dawn for Klemperer.’

For collectors, there is a very rare recording of Klemperer accompanying the eminent violinist Bronislav Gimpel (1911-1979), who had been asked by Klemperer to be his concert master at the Los Angeles Philharmonic from 1937 to 1942. There is also a bonus in the shape of Debussy’s Fêtes from the Nocturnes, a piece not normally associated with the great German conductor.

Edward Greenfield wrote in Gramophone about Klemperer’s Brahms Symphony No.2 studio recording in 1957: ‘There is no question in my mind that this is the greatest, the most revealing Brahms 2nd ever recorded’. According to Richard Osborne, the November 1956 live account is even better. Klemperer’s live Mozart performances in 1956 are similar to his studio recordings but faster, not rushed but ‘live music-making caught on the wing’ (Richard Osborne). Both the studio recordings with the BBC Symphony Orchestra (Beethoven and Schumann) are considerably more vital than the EMI commercial recordings with the Philharmonia.

The first volume of Klemperer recordings from the Richard Itter archive are released as a 4CD set at medium price. The second volume will be released in 2018/19.

Klemperer’s Mozart may sound a bit heavy-handed and brusque…On the other hand, the performances are refreshingly direct, projecting exemplary clarity of texture with the wind instruments rally cutting through the orchestral tuttis to impressive effect. Likewise, the performance of Brahms’s Symphony No. 2 is really compelling, a good sense of structural cohesion working I tandem with great expressivity and rhythmic precision.

Viewed overall, what we have here is the Klemperer we alreay know and love but granted wings and, trust me, you can tell the difference almost straight away.