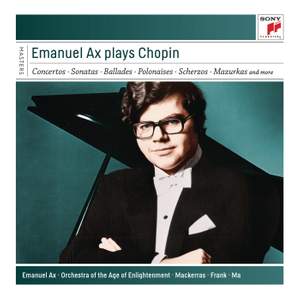 Orchestra of the Age of Enlightenment, Sir Charles Mackerras

Ètude No. 3 in D-Flat Major

Ètude No. 2 in A-Flat Major

Polish by birth and a victor of the Chopin Competition, Six CDs present Emanuel Ax’s interpretations of a stimulating range of concertante, solo and chamber works by his compatriot. The two concertos are played with Sir Charles Mackerras conducting the Orchestra of the Age of Enlightenment across two discs from 1998–1999. In his debut recordings on a historical instrument, Ax conjured “period performances unlikely to be outshone for their imagination and poetry” (Gramophone).