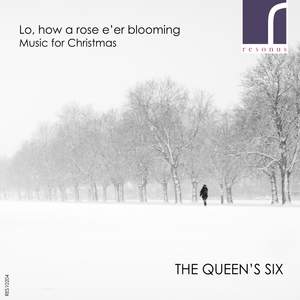 Lo how a rose e'er bloometh

The disc is full of sensitively balanced, expressive performance, most of them sung unaccompanied…A jazzed-up God rest you merry, gentlemen and a chittering Jingle Bells bring fun into the equation,... — BBC Music Magazine, Christmas 2017, 4 out of 5 stars More…

Arthur Sullivan, David Willcocks: It Came Upon a Midnight Clear

Jacques, R: Away in a Manger

Bennett, R R: Out of your sleep

The Queen’s Six release their third album on the Resonus Classics label with a scintillating and varied programme of music for Christmas. Both modern and traditional carols feature alongside a selection of lighter and contemplative evocations of the festive season.

The Queen’s Six bring their trademark flair to this broad range of arrangements for men’s voices, with works from the Renaissance to the present day, including a tribute to the life of the inimitable David Willcocks, forever associated with the Christmas season, and new works by Thomas Hewitt Jones, Richard Madden & Matthew Coleridge.

Released on CD and in digital formats ranging from MP3 up to 24-bit studio quality master with a 24-page booklet as a PDF.

The disc is full of sensitively balanced, expressive performance, most of them sung unaccompanied…A jazzed-up God rest you merry, gentlemen and a chittering Jingle Bells bring fun into the equation, too. Recommended.

Everything's wonderfully tasteful but never too reverential, and the Six throw in a pleasing selection of rarities. Witty arrangements of “God rest you merry, gentlemen” and “Let it snow” crop up near the close. All highly appealing, and predictably well-recorded.