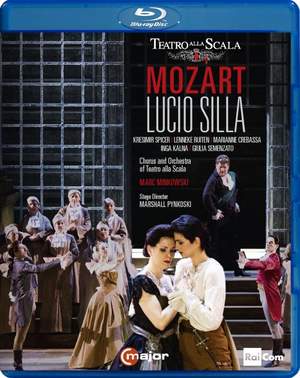 Here’s a director who makes no apology for the work…[Pynkoski] creates his own aesthetic of artful, flowing theatricality, which is underlined effectively by Antoine Fontaine’s designs…Špicer... — Gramophone Magazine, March 2018 More…

This dramatic opera is associated with one of Mozart’s sojourns in Milan. The Austrian genius was sixteen when he composed this jewel of bel canto dedicated to the general and dictator of Ancient Rome: Lucio Silla made its debut on 26 December 1772, when Mozart was almost seventeen. It was the third opera that he had staged in the Regio Ducal Theatre, Milano. The staging by Marshall Pynkoski, specialized in eighteenth-century operas with particular insights into Baroque dance, drama and gestures, pays ‘attention to detail, making use of scenes and eighteenth-century impeccably decorated costumes designed by a specialist of the genre in film, Antoine Fontaine’ (delteatro.it). ‘The female cast is remarkable’ (La Repubblica).

Here’s a director who makes no apology for the work…[Pynkoski] creates his own aesthetic of artful, flowing theatricality, which is underlined effectively by Antoine Fontaine’s designs…Špicer sings mellifluously even if his tone is short of sweetness and focus…Crebassa makes a fantastic Cecilio, handsome and beautifully sung…For an effective video version of this opera, this can be recommended.

No one would mistake the Orchestra of La Scala's full-bodied sound for that of a period-instrument ensemble, but it plays very stylishly for Marc Minkowski, and with great energy. The cast is committed and highly musical - and coloratura is generally excellent, thankfully given that it is an extensive feature of most arias. Most impressive is Kresimir Spicer, whose lightish and fluent tenor is a delight, and who brings stature and depth to the titular dictator.