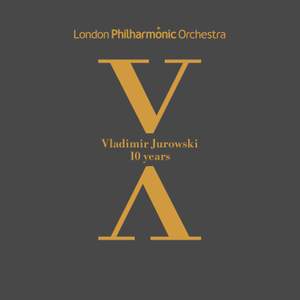 Glinka: Spanish Overture No. 1 'Capriccio brillante on the Jota Aragonese'

Glinka: Valse-Fantaisie in B minor for orchestra, G. ii213

The Buffoon and His Wife

The Buffoon as a Young Woman

The Young Woman Becomes a Goat

Fifth Entr'acte and the Goat's Burial

I. Over the stream, the swift stream

II. Ah, Vanka, you are so dashing

III. My cheeks, so white, so rosy!

I. And so it will pass, as written in the scriptures!

III. O hearken, you whose heart is faint and wilted!

IV. All this the angel told me at my vigil

Vladimir Jurowski is the leading conductor of his generation, and one of the most sought-after, universally acclaimed for his incisive musicianship and artistic vision. His relationship with the London Philharmonic Orchestra started in 2001, and over the ensuing years has become a dynamic and revered artistic partnership. In celebrating Vladimir Jurowski's first 10 years as Principal Conductor since 2007, this set of recordings embraces established orchestral classics as well as unearthing rarely heard masterpieces, certain to both challenge and reward the listener simultaneously. These 22 previously unreleased recordings showcase Jurowski’s typical flair for brilliant programming. These pieces were recorded live at Southbank Centre’s Royal Festival Hall and the Royal Albert Hall.