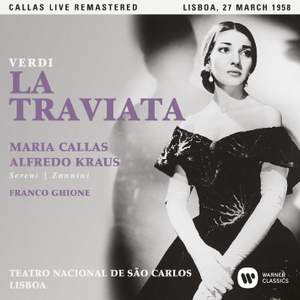 Callas sang La traviata more frequently than any other opera, apart from Norma. She performed it over 60 times between 1951 and 1958, most famously in Luchino Visconti’s production at La Scala in 1955/56. Her only studio recording of the role was made in 1953, but by the time she performed it in Lisbon in 1958, she had become still closer to the character; the critic John Steane wrote that the final act of her interpretation at the Teatro Nacional de São Carlos is “the culmination of the great singing actress’s art”. Callas’s Alfredo is a tenor renowned for his elegance and sensitivity, Alfredo Kraus and his father is sung by the Italian baritone Mario Sereni, long a mainstay of the Metropolitan Opera. Later in 1958, in Dallas, Callas gave her last-ever performance of Violetta.