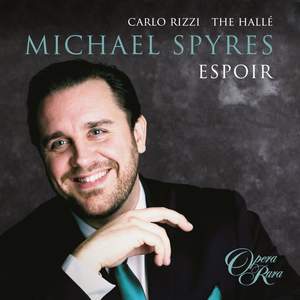 Listening to the music composed for [Duprez] by a generation of French composers, you can understand the excitement he caused…this CD is more than musical archaeology. Spyres is a magnificent... — BBC Music Magazine, November 2017, 4 out of 5 stars More…

The American tenor talks to Katherine about his tribute to the pioneering French tenor Gilbert Duprez, out on Friday on Opera Rara.

Hailing from Mansfield, Missouri, Michael Sypres originally set out to pursue a career in musicals before singing opera. He comes from a family of musicians who run an opera company in Springfield MO, and after studying in the US, travelled to Europe to complete his studies in Vienna. He has rapidly established a formidable reputation for his sensitive singing and astonishing vocal range, with leading roles a the Royal Opera House Coven Garden, Lyric Theatre Chicago, Opéra de Paris and Aix-en-Provence Festival. In 2017, he appeared as Don José in Carmen in Paris and sang Enée, opposite Joyce DiDonato in Berlioz's Les Troyens in Strasbourg.

Michael starred on the Opera Rara recording of Donizetti's Les Martyrs, which received a string of awards including Opera Recording of the Year at the International Opera Awards in 2016. He returned to Opera Rara to record Le Duc d'Albe and now we are thrilled to release his debut solo recital album, featuring 19th century repertoire synonymous with the tenor-of-his-day, Gilbert-Louis Duprez. Espoir includes arias in French and Italian by Donizetti, Berlioz, Verdi and Rossini, as well as duets with Joyce El-Khoury, whose debut recital recording will be released alongside Michael's.

Listening to the music composed for [Duprez] by a generation of French composers, you can understand the excitement he caused…this CD is more than musical archaeology. Spyres is a magnificent addition to that rare band of bel canto tenors who willingly sacrifice vocal heft for supple phrasing.

Spyres is magnificent throughout the disc…he delivers Cs, Ds and, in Le lac des fées, an astonishing top E flat with overwhelming power and confidence…Rizzi and the Hallé provide lively accompaniments, with some fine solos.

Musical history aside, these discs deserve a place on the shelves due to the extremely high quality of singing...notable highlights [are] the refulgent tone he pours into the Cellini aria, his savouring of text as well as notes in the final scene from Lucia...and his sheer fervour in Gaston's aria from Jérusalem...Rizzi conducts with a blend of security and stylistic authority, while the Hallé plays wonderfully for him.

Spyres is fearless in the high-lying parts written for Duprez...which sometimes venture above high C. This Spyres accomplishes with his deft voix mixte — a blend of chest and head voice — to thrilling, if not always beautiful, effect.

Spyres, with elegant support from the Hallé and Carlo Rizzi, demonstrates his ease in top notes, his fluency and his athletic flexibility.

Spyres’s voice is a cleaner, more straightforward sound. His French is impeccable, and he keeps his tone forward and bright, with a strong sense of propulsion and rhythmic vitality.