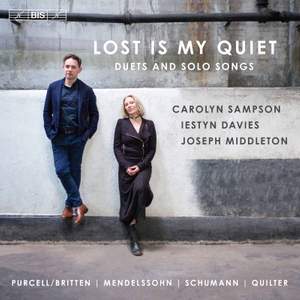 Lost Is My Quiet

The art of vocal duetting is exemplified at its best in this recital by two of today’s finest British singers, working with an accompanist of equal merit…each singer has solo items…Yet the most... — BBC Music Magazine, Christmas 2017, 5 out of 5 stars More…

No. 12, So wahr die Sonne scheinet

No. 5, Music, When Soft Voices Die

Quilter: Drink to me only with thine eyes

Interview,  Lost is my Quiet

Katherine talks to Carolyn Sampson, Iestyn Davies and Joseph Middleton about their new album of duets by Purcell/Britten, Mendelssohn, Schumann and Quilter.

Carolyn Sampson and Iestyn Davies have collaborated on many occasions in the field of Baroque opera and oratorio, but on this occasion they venture into a somewhat different territory. In the company of Joseph Middleton, they have been exploring the Lieder for one and two voices of Mendelssohn and Schumann, combining them with songs and duets by Roger Quilter.

And even though the disc actually opens with a set of Purcell songs – repertoire which both singers have previously made their mark in – they are here performed with the piano accompaniments realized by Benjamin Britten, turning them into something quite new and different.

‘Creamy’, ‘luminous’ and ‘supple’ are words that often appear in reviews about both Carolyn Sampson and Iestyn Davies, and in these duets they achieve a

marvellous blend as well as the utmost precision. They are aided in this by Joseph Middleton, described in The Telegraph (UK) as an ‘unfailingly sensitive accompanist’.

The art of vocal duetting is exemplified at its best in this recital by two of today’s finest British singers, working with an accompanist of equal merit…each singer has solo items…Yet the most memorable tracks are inevitably the duets, with Joseph Middleton’s striking playing reminding us how essential pianism is to such enterprises.

Carolyn Sampson and Iestyn Davies make a symbiotic partnership in these assorted duets, their tone (not least their control of vibrato) and style ideally matched. They are compelling interpreters, too, with an infectious sense of shared enjoyment...Here is a captivating, unhackneyed programme, presented by singers – a double act in a thousand – and pianist with a style and allure it would be hard to beat.

Sampson’s and Davies’s voices blend perfectly, and they sing Britten’s realisations of Sound the Trumpet and Lost Is My Quiet stylishly, but the fleeter Mendelssohn numbers are the real delight...Sheer delight.

Carolyn Sampson’s soprano sparkles and Iestyn Davies’s countertenor glides through the air in this compilation, individually and in duet. They sing together with an enjoyment of the music’s ebb and flow that is clearly shared by their pianist, Joseph Middleton...what’s on offer here is beautifully judged, the two voices playing off each other and sharing nuanced expression