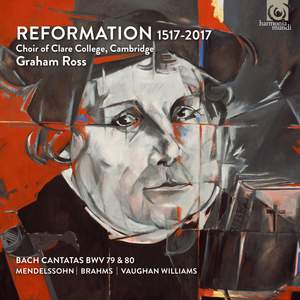 Thanks to the instrumental incisiveness of Clare Baroque, a splendid quartet of soloists, and Ross’s well-chosen tempos, the Bach has plenty of bite. All in all, an astutely conceived, rewarding... — BBC Music Magazine, November 2017, 4 out of 5 stars More…

Luther: A mighty fortress is our God

Cruger: Now thank we all our God (Nun danket)

In 1517, indignant at mercenary practices of the Catholic Church and convinced that a public debate was needed to restore faith in the founding texts of the Bible, Martin Luther nailed his 95 Theses to the door of the church in Wittenberg Castle. This marked the beginning of the Protestant Reformation, of which he was a seminal figure, which was to spread all over Europe.

Five hundred years later, in 2017, Graham Ross and the Choir of Clare College, Cambridge marked the anniversary with a series of cantatas by J. S. Bach performed liturgically in Clare College Chapel on the eight Sundays of Lent Term. This recording is the culmination of that project, presenting chronologically the two great Reformation cantatas of J. S. Bach and three chorale-based works by Mendelssohn, Brahms and Vaughan Williams, each preceded here by the chorale melody or hymn on ̀which they are based, giving an insight into the emotional and dramatic strength of the Reformation's theological and cultural legacy.

Thanks to the instrumental incisiveness of Clare Baroque, a splendid quartet of soloists, and Ross’s well-chosen tempos, the Bach has plenty of bite. All in all, an astutely conceived, rewarding addition to Luther year.

This is primarily joyful music and the buoyant performances by the Choir of Clare College, Cambridge, and Clare Baroque, conducted by Graham Ross, lift the spirits.

The choir bring all their customary precision and purity to the Bach, but it's once they arrive at the later repertoire...that they really come into their own...The darker-hued Brahms glows with love and care, its extended opening movement shaped with an eye to sonic drama, and the Vaughan Williams balances its solo and choral forces to striking effect.

The choir sometimes sounds a little too youthful: neat and tuneful, but falling short on rich timbre. However, there is much exciting instrumental work from an ensemble packed with distinguished names, and seasoned solo singing from Neal Davies, Nicholas Mulroy and the like.