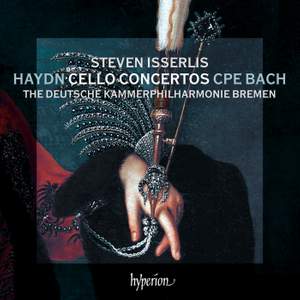 His interpretations, graceful and finely-etched before, now have a more rugged depth, and the new variants on his own cadenzas speak of experience…His own arrangement of Mozart’s heavenly ‘Geme... — BBC Music Magazine, November 2017, 5 out of 5 stars More…

The cellist talks to David about his new album of eighteenth-century cello concertos, released earlier in the month on Hyperion.

If the two Haydn concertos are the most accomplished contributions to the cello’s burgeoning repertoire written in the eighteenth century, the CPE Bach coupling is scarcely less fine. Two charmingly rococo encores complete this latest essential release from Steven Isserlis.

His interpretations, graceful and finely-etched before, now have a more rugged depth, and the new variants on his own cadenzas speak of experience…His own arrangement of Mozart’s heavenly ‘Geme la tortorella’ from La finta giardiniera is a masterclass in radiant, unshowy legato.

These interpretations sing of an artist still thoroughly in tune with his previous thoughts, but who is keen to develop those ideas further. He's supported every step of the way in this pursuit by the warmly responsive Deutsche Kammerphilharmonie Bremen...Isserlis's 1998 recording [of the Haydn] remains classy stuff, but this has superbly trumped it.

His partnership with the brilliant Bremen orchestra is a musical marriage made in heaven.

This recording is a real tonic. I defy anyone not to smile at Steven Isserlis’s effervescent readings of Haydn’s graceful and urbane cello concertos...He spins an exquisitely light and agile line, maintaining a delightfully sunny disposition, even in each concerto’s adagio...The Bremen players add just the right degree of elegance and poise to make this a CD to treasure.