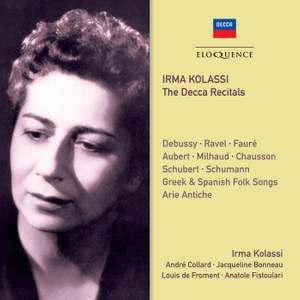 Here is a lovely record. Far from becoming bored by repeated playing of it, I have found my response to the music and the interpretation steadily grow. — Gramophone Magazine, June 1954 More…

anon.: The spring under the plane tree - arr. Lavda

anon.: The price of a kiss - arr. Kalomires

trad.: The Young Maid Of Alatsata

Newly remastered and compiled for the first time, the complete Decca recital albums of Irma Kolassi are now available on this 4CD set from Eloquence. Born in Greece but raised in Paris, began her career as a pianist until her ‘richly regal’ (The Times) mezzo-soprano was discovered. As a vocal coach in Athens she worked with Maria Callas before relaunching her career as a recitalist back in Paris.

Decca issued ten separate releases, all recorded between June 1952 and October 1956. The range of repertoire – covering not only the usual Arie antiche and folk songs but the refined challenges of Fauré and Debussy, rarities and new songs by Milhaud, Joaquin Nin and Louis Aubert – reflects an intelligence recognised by John Steane in his Gramophone review (July 2003) of a previous reissue: ‘an exceptionally sound musician among singers … above all, she was an excellent sight-reader who happened also to have a beautiful mezzo-soprano voice.’

In the booklet’s detailed appreciation of Kolassi’s career, Tully Potter remarks that most of her best work on record is contained in these Decca recordings. When she appeared at the Wigmore Hall in London in 1955, The Times praised her ‘variety of colour and control of delivery. Thus the smoothness of a clarinet-like quality was used in the purely lyrical songs of Duparc; it became an oboe in Milhaud’s Poèmes juifs and suited the tartness of Roussel; in Debussy she sang parlando and in Ravel’s five Greek folk-song settings she launched it with freedom and simplicity upon the air.’

Two separate recordings of Ravel’s Cinq Mélodies populaires grecques offer a fascinating point of comparison. Alongside the witty and suggestive song-cycles of Ravel and Debussy (Fêtes galantes, Chansons de Bilitis), however, there are precious examples of Kolassi’s sensiviity in the realm of German art-song, with excerpts from Schumann’s Myrthen and Liederkreis Op.39, and three classic Lieder of Schubert. The final disc of this anthology gathers her rare vocal-orchestral recordings: arias from Berlioz’s La damnation de Faust and Massenet’s Werther, coupled with the refined opulence of Chausson’s Poème de l’amour et de la mer. The Chausson is shaped by Kolassi’s superb vocal control, which allows the Wagnerian lines to float free of stress on a gently rolling sea of sonority, steered by the French conductor Louis de Froment. But then Kolassi hardly made a bad record: a shame for posterity that there are so few of them, but at least all the important ones can now be enjoyed together, in up-to-date transfers.

A complementary release from Eloquence (ELQ4824621) pairs the Berlioz and Massenet items with the major duets from those operas which she recorded with Raoul Jobin.

Here is a lovely record. Far from becoming bored by repeated playing of it, I have found my response to the music and the interpretation steadily grow.

The singing throughout is most intelligent, and frequently succeeds perfectly in capturing the atmosphere of the words, while Jacqueline Bonneau accompanies with great skill and sensitivity … it should certainly be in the collection of all connoisseurs of vocal art.