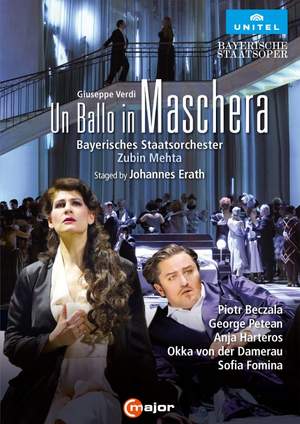 The foregrounding of Oscar’s character is fascinating. It’s a striking performance amid a clutch of stellar turns…The ensembles are expertly balanced by Zubin Mehta, and the orchestra plays with... — BBC Music Magazine, August 2017, 4 out of 5 stars More…

Munich’s new Ballo in maschera has received much critical acclaim: ‘This production shows what a utopia opera can be’ (Abendzeitung). Ten years after stepping down as music director of the Bavarian State Opera, Zubin Mehta returned to Munich in March 2016 to celebrate his 80th birthday conducting Verdi’s masterpiece for the first time in a staged production. His cast features some of today’s finest Verdi singers: soprano Anja Harteros, singing Amelia for the first time and ‘filling every note with Verdian intensity’, tenor Piotr Beczala as a ‘visually and vocally dashing Riccardo’ and George Petean as an ‘exemplary’ Renato (Neue Musikzeitung). In director Johannes Erath’s super-sensitive new production, this historically-based tale of illicit love, conspiracy and betrayal unfolds in a surrealistic, shadowy setting transformed by lighting and projections. Special praise was showered by the enthusiastic critics on Maestro Mehta, whom ‘creates concentrated musical connections, miraculously guiding his orchestra and unsurpassable voices the way a thermal lifts a paraglider... Musically the performance was a dream‘ (Frankfurter Allgemeine Zeitung).

The foregrounding of Oscar’s character is fascinating. It’s a striking performance amid a clutch of stellar turns…The ensembles are expertly balanced by Zubin Mehta, and the orchestra plays with a reliably silky tone.

Musically things are more than fine. Beczała pulls off this one hell of a tenor role…with style and confidence. Harteros gives her usual tightly focused emotional performance. With good sound and helpful shot selction the release is strongly recommended.

the production looks glamourous and slick…As Riccardo, Piotr Beczala is a dashing and vocally elegant protagonist…