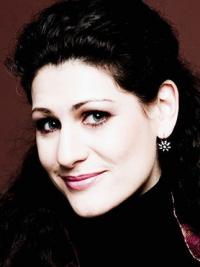 The German lyric-dramatic soprano Anja Harteros was born near Cologne in 1972 to a Greek father and German mother; following operatic engagements in Gelsenkirchen and Bonn, she won Cardiff Singer of the World in 1999 (the first German singer to take the prize), which kickstarted her international career as well as the beginning of a lengthy relationship with the Bayerische Staatsoper (the company’s artistic director had been on the Cardiff jury). From the late 2000s onwards, she has appeared regularly opposite star tenor Jonas Kaufmann in roles including Elisabetta (Don Carlo), Leonora (La forza del destino) and Elsa (Lohengrin), which she sang to great acclaim in Richard Jones’s landmark production for Munich in 2009 (available on DVD and Blu-ray on Decca); she also sang the title-role opposite Kaufmann’s Radamès on Antonio Pappano’s multi-award-winning recording of Aida in 2015.