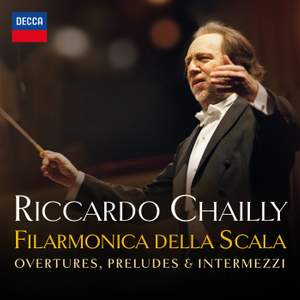 An attractive programme [which] shows off the high quality of the Filarmonica della Scala…the brightness of the strings is offset by the warmth of the horns…and a neatness of attack as well as... — BBC Music Magazine, May 2017, 4 out of 5 stars More…

After almost 40 years on DECCA and over 3 million album sales Riccardo Chailly starts a new chapter in January 2017 as Music Director of Teatro alla Scala, Milan, the world’s most iconic opera house. A Triumphant Homecoming: Milanese by birth, Chailly made his conducting debut at La Scala in 1978, as assistant to Claudio Abbado. Chailly’s father Luciano had also served as Artistic Director at La Scala, completing a family dynasty. The Filarmonica Della Scala CD is a sonically spectacular recording celebrating three centuries of music first performed at the legendary opera house: overtures, preludes and intermezzi from Verdi, Rossini, Puccini and many others. All new to Chailly’s discography.

Chailly brings a Toscanini-like glamour to this music...It’s all dazzling, but the highlight, for me, is Ponchielli’s Dance of the Hours, immortalised by Disney’s Fantasia. You won’t hear this superb ballet music more stylishly played.

There may be room for improvement here and there in the orchestra, but the recording suggests that most sections are already in fine shape – the brass is particularly impressive in the Boïto extract. Chailly has always been a superb Puccini conductor, and predictably it’s the music of the last decades of the 19th century that shows him at his best here.