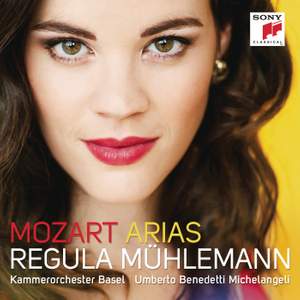 Regula Mühlemann was born in Lucerne, Switzerland where she currently resides. She completed her studies at the Conservatory of Lucerne in 2010 graduating with distinction. In June 2012 she completed her master studies in «Solo Performance» - again with distinction and top marks. She made her operatic debut at the Theater Luzern. In past seasons, Regula has sung at the Zurich Opera House performing Giannetta in L' Elisir d'Amore, and as Despina in Così fan tutte at the Teatro la Fenice, Venice. In May 2012 she performed L’Elisir d’amore at the Festspielhaus Baden-Baden, alongside Rolando Villazón who both sang in and directed a highly acclaimed production. This production was broadcast on TV on December 2012. In summer 2012 she also made her debut at the Salzburg Festival, singing the young Papagena in P. v. Winter’s opera Das Labyrinth.

Mühlemann’s soprano suits this repertoire, though its clear brilliant sound does turn hard at times…for a debut solo disc this makes an attractive proposition