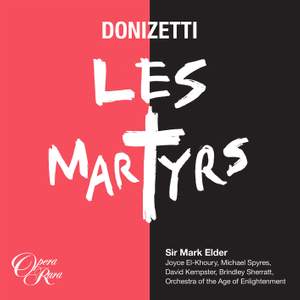 Orchestra of the Age of Enlightenment, Sir Mark Elder

Katherine listens to the first ever complete recording of Donizetti's opera.

Ahead of Opera Rara's release of the work's premiere recording next month, Katherine talks to the British conductor about Donizetti's Parisian breakthrough.

A tragic tale of Christian martyrdom, Les Martyrs began its life as Poliuto, Donizetti’s Italian opera which – due to its religious content – was banned before its Naples premiere. Greatly angered by the Italian censors’ decision, Donizetti moved to Paris in the hope of conquering the Opéra de Paris and securing his status as a composer of international repute.

Les Martyrs brings together Opera Rara and the Orchestra of the Age of Enlightenment for their fourth collaboration. Sir Mark Elder conducts an outstanding cast featuring Michael Spyres and Joyce El-Khoury in the central roles. They are joined by David Kempster, Wynne Evans, Brindley Sherratt and Clive Bayley.

Elder’s conducting is limpid and flexible, the rubato natural and seductive...Spyres offers plenty of bel canto style and beautifully schooled phrasing...[El-Khoury's] performance as Pauline is hardly less remarkable, and tireless in bringing the character to life. Doubts remain about the work itself, but there’s little doubting Opera Rara’s achievement in letting us hear it sound so thrillingly fresh.

The drama and tension [Elder] builds in the concluding act in this performance is awesome. He inspires soloists and chorus to marvellous effect that convinces me that it is among the finest music Donizetti wrote.

informed above all by Mark Elder's combination of baton mastery and missionary zeal...[Spyres is] noble and radiant of tenor timbre, unfailingly both strong and sensitive in his delivery of the text...what counts is the impact of the whole - and that is tremendous.

[Spyres] commands absolute attention from his very first phrase...he packs a voice with real heroic ring and tremendous facility in the stratosphere...el-Khoury is equally fine as his conflicted wife Pauline, singing with tireless passion and pathos.

The performance by Opera Rara is excellent. Mark Elder is one of the great champions of this composer’s music, and he and the Orchestra of the Age of Enlightenment interpret it with a blazing conviction that rises to the classically majestic...the outstanding contribution comes from Michael Spyres, singing with virtuosic bravado as the heroic convert.

Elder reveals a new side to a composer too often seen as a purveyor of generic bel canto rum-ti-tum...the superb playing of the OAE, the vibrant Opera Rara chorus and the fine cast make you believe it. Spyres is terrific and Joyce El-Khoury is a heartfelt, stylish Pauline.

I suspect we will never hear a better performance of this opera...The Polyeucte of Michael Spyres is remarkable...clarion top, appealing tone, styles both exclamatory and tender are ideal for the part...[El-Khoury] has a fine, big lyric voice, at ease with the coloratura she’s given, fluent in cantilena, dramatically on-the-money.

The Independent on Sunday 3rd May 2015

Elder conducts with fervour, the Orchestra of the Age of Enlightenment plays superbly and the cast is excellent...[Spyres and El-Khoury] are thrilling, especially the soprano's ascents to some elegantly spun pianissimi. David Kempster's Sévère is confident, Brindley Sherratt's Félix smooth...No mauling here, this is a first-rate recording.