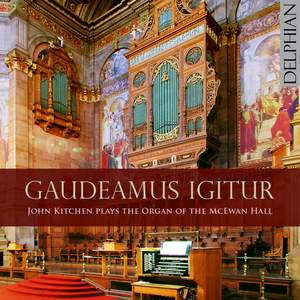 John Kitchen plays the organ of The McEwan Hall

No. 2, Grand choeur in G Major

No. 2, Marche religieuse (After Handel)

Delphian stalwart John Kitchen has now served for thirteen years as Edinburgh City Organist and twenty-seven years as University Organist. In the latter capacity he has played for no fewer than 400 graduation ceremonies. The formidable Hope-Jones/Willis instrument in the University of Edinburgh’s purpose-built graduation hall is as eccentric as it is eye-catching, and following its recent refurbishment, Kitchen has recorded this conspectus of the music he might play during or after one of those numerous ceremonies. From an anonymous student song popular in the eighteenth century to a serious and substantial work by the University’s former Reid Professor of Music Kenneth Leighton, Kitchen’s programme exudes pomp and grandeur on one of the UK’s biggest instruments in one of the UK’s biggest acoustics.

Kitchen cannot fail to impress on this attractively presented disc