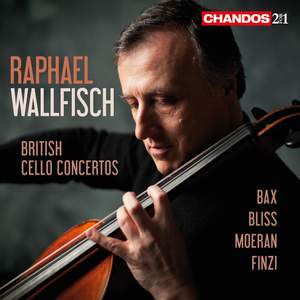 Stanford: Irish Rhapsody No. 3 for Cello and Orchestra Op. 137

This two-album set features British cello concertos from Raphael Wallfisch’s best late-1980s recordings. He has always worked closely with leading British composers of our time and is now regarded as the finest performer of their works for cello. As International Record Review asserted, ‘no British cellist has done more to advocate British composers than Raphael Wallfisch... [His] playing evinces that attention to detail, tonal finesse and understated conviction which has long made him an exponent of new and unfamiliar music.’

Those works are probably among the finest of the twentieth-century British repertoire. The original recordings won enthusiastic reviews, helped by such champions of British composers as Vernon Handley, Norman Del Mar, and Bryden Thomson, here conducting top British orchestras such as the Royal Liverpool Philharmonic and London Philharmonic.