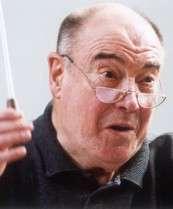 Throughout his life Vernon Handley was unique amongst front rank conductors in that he unashamedly championed British repertoire before that of all other countries. Recognised as Sir Adrian Boult’s protégé he held steadfastly to two principles, which might have proved detrimental to a successful career: the undemonstrative technique and the unfashionable repertoire.

Vernon Handley probably recorded, performed and broadcast more British music than any other conductor living or dead. In some 160 discs, over 90 were British, including 87 works which had not been recorded before. He gave over 100 premieres. In his recorded output are all the symphonies of Vaughan Williams, Bax, Stanford, Arnold and Robert Simpson, all the major works of Elgar and the whole of Moeran’s orchestral music.

Find out more at https://en.wikipedia.org/wiki/Vernon_Handley