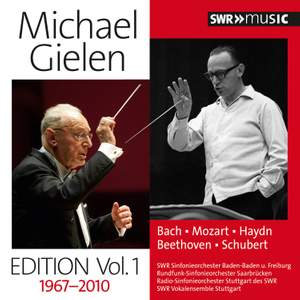 On 30 October 2014 it was announced that Michael Gielen would no longer pursue conducting engagements owing to health issues. With this in mind, and with regard to his

90th birthday in July 2017, the time seemed ripe to honour this outstanding musician by making a detailed survey of his five-decade career as a leading conductor. Hence the Michael Gielen EDITION.

The ten volumes contain Gielen’s interpretations of key works by the composers he held most dearly (Beethoven, Bruckner, Brahms, Mahler, Bartók, Stravinsky) as well as works by composers of the Second Viennese School. Additionally, there are Michael Gielen’s recordings of works from different periods in music history – from Bach to Schubert, from Carl Maria von Weber to Sergei Rachmaninov, plus works from the late romantic, early 20th century and post-Second World War periods.

Volume 1 presents Gielen’s recordings of works from Bach to Schubert that were made during the period 1967 to 2010. Many of these were never released, which now affords an insight into the interpretive development of the conductor. Some listeners will be surprised to find that Gielen recorded works with which he was never really associated.

This EDITION will certainly lead to a re-valuation of the conductor Michael Gielen. More important than cementing his reputation as a peerless conductor, however, will be the opportunity to discover a wide range of musical works interpreted at the highest level.