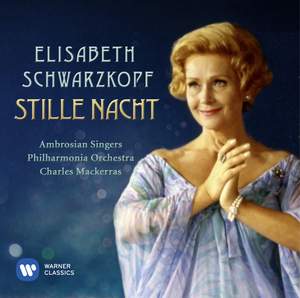 Supported by Sir Charles Mackerras’s brilliantly atmospheric arrangements for chorus and orchestra, the legendary opera and lieder singer is heard here in a magical album that stands apart from her great classical recordings and that is now available for the first time in a release remastered from the original stereo tapes.

Most of the items on this recording are well-known Christmas carols or folk songs from many countries. The first song Stille Nacht, heilige Nacht is perhaps the most popular and familiar of all Christmas songs, in fact it is so universally known that most people have the mistaken idea that it is a folk song. Actually, however, it was composed by a humble Austrian organist and schoolmaster, Franz Xaver Gruber and it is here recorded for the first time in its original setting exactly as the composer wrote it. The accompaniment is a strange one, consisting of strings, two horns and guitar and it will be noticed that the melody and even some of the words are slightly different from the version generally known nowadays. The song was first performed on Christmas Eve, 1818, in the village church at Oberndorf. The presence of such an unecclesiastical instrument as the guitar is explained by the fact that the organ in the church had broken down, so a guitar was used instead! The lilting string and guitar accompaniment and the soft yodelling of the horn give the enchanting effect of a real Upper Austrian Wiegenlied which is very far removed from the over-sentimental arrangements of this song to which music-lovers have grown accustomed. The two solo parts were originally sung by the composer himself and Joseph Mohr, the author of the words, but here both parts are sung by Madame Schwarzkopf.

After this lullaby for Chrismas Eve come two hymns of rejoicing for Christmas morning, an English one, O come all ye faithful and a German, O du fröhliche. The former hymn was originally Roman Catholic, having Latin words and was probably composed in the 18th century. However, the hymn is more generally known in the English translation by Frederick Oakeley and it is sung here in this version.

Next follows a traditional German lullaby Sandmännchen. This song tells of the legendary little man who comes at night and scatters sand in the eyes of children who have not gone to sleep. Many children’s folk songs were arranged for voice and piano by Brahms and his setting of Sandmännchen has been used in the second verse of the present arrangement. From the naive simplicity of Sandmännchen, we come now to that most passionate and heartfelt song of unrequited love and broken promises, In einem kühlen Grunde. This song is so familiar, especially in Germany, that like Stille Nacht, it is often thought to be a folk song. However, it was composed in 1814 by Frederick Gluck and the words are by the German poet Eichendorff.

In direct contrast to this romantic, typically German out-pouring of a tortured soul is Cesar Franck’s very French and very Catholic devotional melody, Panis Angelicus. This song formed part of a little mass for three voices which Franck composed when he was organist and choirmaster at the church of St. Clotilde in Paris. The tune has a certain ‘voluptuous piety’ and is remarkably evocative of mystic ritual, incense and 19th century French churches. But for all his piety, Franck can still give us a very cleverly wrought canon between voice and strings for his second verse.

Next comes perhaps the best known of English Christmas carols, The First Nowell, arranged for solo soprano, chorus, organ and large orchestra. This tells the story of the shepherds and the three Wise Men who were guided to the infant Christ by a Star in the East. The shepherds watching their flocks appear as the subject of many Christmas carols and there used to be a tradition in many European countries that shepherds would come down from the hills at Christmas time and play bagpipe music before the crib and other representations of the Virgin and Child.

In dulci jubilo is one of the oldest carols in existence. This ancient song with its strange mixture of Latin and old upper German dialect words probably formed part of a German mystery play. The German part of the text, however, was translated into English by John Wedderburn in 1567 and the carol has become as well known in England as in Germany. Many composers have used the tune as a basis for their compositions, notably J. S. Bach, who wrote several chorale preludes around it. For the arrangement of the carol on this record, one of Bach’s settings has been freely transcribed in the last verse.

Weihnachten is a charming Christmas song by Humperdinck, well worthy of the composer of that most beautiful of Christmas operas, Hansel and Gretel. Both the opera and the song have words by the composer’s sister Adelheid Wette.

Staying in the realm of a child’s Christmas, we come now to Vom Himmel hoch, which is not the famous Lutheran chorale of the same name but an old Austrian cradle song. It is a child’s view of the music in Heaven, the flutes, trumpets, harps and violins, the heavenly choirs and the soft lutes which lull the children to sleep.

The last verse is a charming, almost Mozartian song of praise to God. The English carol, I saw three ships come sailing in, is an entertaining survival of the old Mystery Plays, half religious and half secular. The tradition of the Christmas ship sailing in laden with gifts exists from the earliest times in Anglo-Saxon countries.

In the little Wiegenlied, Maria auf dem Berge, we see the Virgin and Joseph through the eyes of a Tyrolean or Silesian peasant. It is set as a naive, almost comic dialogue between the Holy Parents about the rocking of the sleeping Christ Child.

The last item on the record is the 17th century German hymn for Easter Sunday, Lasst uns erfreuen, one of the noblest melodies in existence. This is a song of rejoicing for the risen Saviour and is a favourite Easter hymn in both England and Germany.

The large orchestra and chorus employed to accompany Madame Schwarzkopf, especially the high Bach trumpets in the last verse, make a fitting climax to this record of well-loved songs.