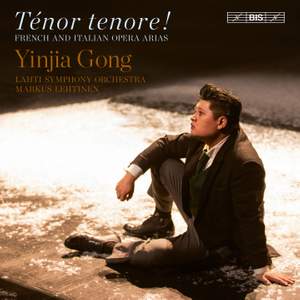 Gong's voice, essentially lyrical in timbre, has a clean, ringing power to it, and he sings securely right through the range. At the moment, though, he applies a one-size-fits-all, slightly stentorian... — Gramophone Magazine, September 2015 More…

Yinjia Gong grew up in the province of Guizhou in China, and developed an interest in music early on. While studying Chinese traditional music he became fascinated with Western opera, and in 2008 his admiration for the great Swedish tenors Jussi Björling and Nicolai Gedda took him to Sweden. There Gong's impressive top register soon attracted attention, and in 2011 he was invited to perform at a gala concert at the Royal Swedish Opera, commemorating the centennial of Björling's birth. Appearing alongside singers such as Jonas Kaufmann and Charles Castronovo, Gong was given the honour of performing Puccini’s Nessun dorma – one of Björling’s trademark arias. Naturally, Nessun dorma is also part of the programme on Gong's début recording, along with a series of other jewels of the tenor repertoire. The programme also charts the golden age of Italian and French opera from the beginning of the nineteenth century to the start of the twentieth.

Gong's voice, essentially lyrical in timbre, has a clean, ringing power to it, and he sings securely right through the range. At the moment, though, he applies a one-size-fits-all, slightly stentorian approach...Luminously recorded and featuring fine playing from the Lahti Symphony Orchestra under Markus Lehtinen, however, this disc seems to be less about the finished article than this singer's potential.

The Carmen Flower Song shows Gong at his best: it builds steadily from a sweet and gentle opening to a climax of considerable power. He shows off his high Cs and a D in the Fille du régiment and Postillon du Lonjumeau numbers, the top notes all brilliant and perfectly formed, with a genuinely heady quality to the vocalism.