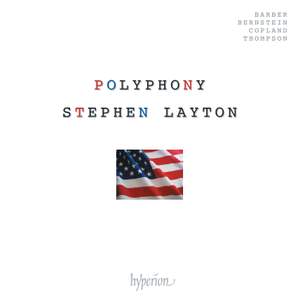 This is the finest performance of Barber's Agnus Dei I've heard by any choir, live or on record…a wonderful recital, not to be missed. — BBC Music Magazine, August 2015 More…

III. Have mercy on us, O my Lord

II. To be sung on the water

I. A nun takes the veil 'Heaven-haven'

I. The virgin martyrs

Thompson, R: Fare Well 'When I lie where shades of darkness'

Stephen Layton talks to David about his recent disc of American choral music with Polyphony.

Recording of the Week,  American choral works from Stephen Layton and Polyphony

This is the finest performance of Barber's Agnus Dei I've heard by any choir, live or on record…a wonderful recital, not to be missed.

This is an atmospheric anthology, fastidiously chosen and delivered by this fine choir.

If ever anyone was under the misapprehension that American choral music begins and ends with the Agnus Dei, this disc is the perfect riposte. A delightful selection, beautifully performed.

Stephen Layton’s Polyphony are an always impressive choir of startling purity and clarity.