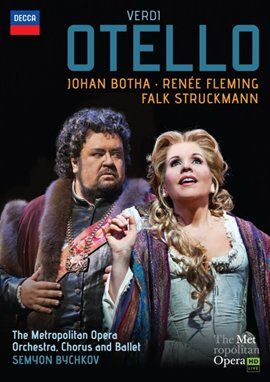 Renée Fleming’s Desdemona enshrines one of her signature roles in a definitive performance: “she knows exactly how to spin the gentle lines of the ‘Willow Song’ and ‘Ave Maria’ so that they softly fill the hall” (New York Times). This 2012 performance was most likely her last on stage, making it a document of historic importance. As the New York Times wrote: “The role was one of her earliest successes with the company, as well as the vehicle for her first Met opening night 17 years ago, and it remains a lovely fit”

Verdi’s late masterpiece is presented in Elijah Moshinsky’s classic MET production with sumptuous sets and period costumes; one of the longest-running opera productions in MET history.