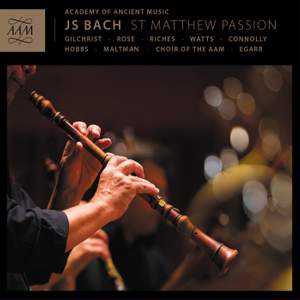 Academy of Ancient Music & Choir of the AAM

Singing and playing are highly polished and assured throughout, with James Gilchrist superb as the Evangelist, and Matthew Rose a credible if rather forceful Jesus — BBC Music Magazine, June 2015, 4 out of 5 stars More…

Part I: Was mein Gott will, das g'scheh allzeit

Recording of the Week,  Passion settings by James MacMillan and JS Bach

In Spring 2015 the Academy of Ancient Music – described as “the finest period-instrument orchestra in the world” by Classic FM – releases a significant new recording of JS Bach St Matthew Passion BWV244, directed from the harpsichord by Richard Egarr.

Performed in the original 1727 version, and with a superlative roster of soloists, this recording is striking in its immediacy, clarity and directness, with numerous insightful and compelling details lost in subsequent versions.

This release – the fourth on AAM Records – follows Birth of the symphony: Handel to Haydn, named BBC Radio 3 “Disc of the Week” and awarded five stars in Classical Music; JS Bach’s St John Passion, which was nominated for a 2014 Gramophone Award for best baroque vocal recording; and JS Bach’s Orchestral Suites, awarded five stars by Fine Music Magazine, and called “exceptional ... a feast of meaningfully understated musicianship” in an Editor’s Choice review in Gramophone magazine.

Singing and playing are highly polished and assured throughout, with James Gilchrist superb as the Evangelist, and Matthew Rose a credible if rather forceful Jesus

The performance is expert, light on its feet, not dogmatic.

[Gilchrist] is a supremely courageous and intelligent reading whose interaction with the human volatility of Matthew Rose's Jesus is profoundly affecting... [Connolly's] 'Erbarme dich' is simply unmissable...[this is a] compellingly original vision of this greatest of all musical tombeaus, with its fresh anticipation founded on collective adrenaline and uniformly outstanding lyrical Bach-singing.

[an] expertly sung and played recording of Bach’s great masterpiece.

it is a fine mainstream reading that makes no pious claims to “authenticity”. Even though none of the soloists is a native German-speaker, their diction is clear, and, in the cases of James Gilchrist’s Evangelist and Sarah Connolly’s mezzo-soprano, the handling of the text is both viscerally emotional and eloquent.

In common with modern thinking Richard Egarr keeps the pacing keen: the chorales are much less ponderously hymnlike than they can sometimes be in performance...With the mellowness of period instruments and with James Gilchrist giving his naturally inflected, eloquently floated interpretation of the Evangelist, this is a timely release for the Passiontide and Easter season, and a welcome one.