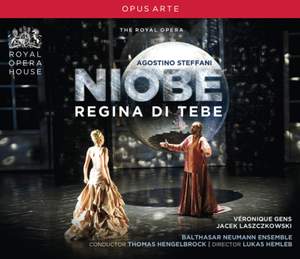 A world-famous court composer during his lifetime, Agostino Steffani was also a significant influence on the likes of Handel, J S Bach and Telemann, but his music fell into neglect after his death.

Thanks to conductor and Baroque specialist Thomas Hengelbrock, Steffani's musically rich and emotionally intense fifth opera Niobe, regina di Tebe, was revived in 2008, and is heard here in The Royal Opera's acclaimed 2010 production.

With a 'delectable' and 'seductive' performance from Veronique Gens as the proud queen who is punished for defying the gods, supported by male soprano Jacek Laszczkowski, who 'thrills with his astonishing power at the top of the voice ...[giving] an exciting approximation of what the castrato could do' (Independent), this recording does full justice to Steffani's forgotten masterpiece.

a central performance of extraordinary spirit and plangency from Veronique Gens...Hengelbrock's ensemble boasts a rich and characterful continuo section...The dance music is muscular, the violins incisive, the percussion imaginative, and the humour robust.

The experienced tragedienne Veronique Gens conveys pathos potently in Niobe's shocked reactions to her husband's suicide and her transformation into stone...Miles's Poliferno is thunderously villainous, and his protege Creonte is sung with brilliant characterisation and rock-solid technique by Iestyn Davies...Hengelbrock's awareness of colour and emotion in Steffani's music is second to none.

The general tone is perkily brisk, with interludes of melancholy. The singing leaves nothing to be desired, with the seductively musky Véronique Gens commanding the title role...Perhaps most arresting, however, is the Polish male soprano Jacek Laszczkowski, who, as King Anfione, executes almost grotesque feats of vocal acrobatics.