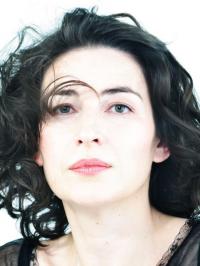 Véronique Gens was born in Orléans in 1966 and trained at the Conservatoire de Paris, making her professional debut aged 20 with William Christie with whom she has continued to work closely throughout her career (she made her Royal Opera House debut in his production of King Arthur in 1995, and sings on his Gramophone Award-winning recording of the work which was issued that same year). Though Gens initially concentrated on soprano repertoire, she identifies as a falcon rather than a true soprano or mezzo, and has become particularly associated with the ‘in-between’ roles of French nineteenth-century opera through her work with Palazzetto Bru Zane (the Venice-based ‘Centre de musique romantique française’): her discography includes rarities such as Halévy’s La Reine de Chypre, Saint-Saëns’s Proserpine, Benjamin Godard’s Dante, and Félicien David’s Herculanum, and an acclaimed series of recordings exploring the development of French operatic heroines and entitled Tragédiennes on Erato. Néère, a recital of songs by Hahn, Duparc and Chausson with her regular partner Susan Manoff, won the solo vocal category at the 2016 Gramophone Awards.

Recording of the Week,  Nuits from Véronique Gens and I Giardini

The French soprano explores the themes of night and dreams on this beguiling programme of mélodies from the Belle Époque, given here in atmospheric new arrangements for voice and piano quintet by Alexandre Dratwicki.

Katherine enjoys Véronique Gens's fascinating recital of French Romantic arias, all with a common theme of dreams and visions.