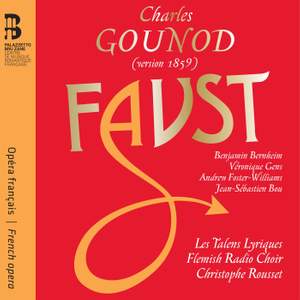 Tenor Benjamin Bernheim is a superb Faust, with a bright and lovely lyric voice that is also comfortable in the lower tessitura of act I. As Marguerite, soprano Véronique Gens is an ideal romantic... — Fanfare, January/February 2020 More…

The French harpsichordist and conductor talks to Katherine about recording Lully's 1677 opera Isis (out now on Aparté) and the original 1859 version of Gounod's Faust, released in September on Bru Zane.

Gounod contemplated a Faust opera as early as his residence in Rome in the 1840s. But almost twenty years were to elapse before one of the most famous works of French Romanticism was premiered at the Théâtre-Lyrique (1859). Its debut at the Opéra in 1869 propelled the work into theatres all over the world, but numerous modifications were the price of achieving that fame.

Between the Faust of 1859 and its counterpart of 1869, some of the spirit has evaporated: the spontaneity of the spoken dialogue and melodrama, the pawky humour of Dame Marthe, the cynicism of Méphistophélès. We have forgotten the charm of the first tenors who sang ‘Salut, demeure chaste et pure’ with the timbre typical of the voix mixte of opéra-comique. Moreover, a large number of pieces were consigned to oblivion by these modifications. To discover this first Faust is to gain a deeper insight into the French aesthetic of demi-caractère, so specific to Paris in the 1850s.

Tenor Benjamin Bernheim is a superb Faust, with a bright and lovely lyric voice that is also comfortable in the lower tessitura of act I. As Marguerite, soprano Véronique Gens is an ideal romantic partner, with a rich and beautiful voice. The recorded sound is marvelous, with the performance showcased to the utmost both in tonal beauty and dramatic impact. For someone like me who has treasured Faust his entire life, this magnificent representation of the opera’s original version is a gift beyond description.

It’s little short of a revelation, in which some century and a half of performance tradition is scraped away to reveal a witty, fleet-footed work that comes close to the composer’s (and librettists’) original conception...It also happens to be a terrific recording on its own terms...Rousset underpins it all with conducting that is fleet and dramatically engaged.

A finely turned performance under Rousset— thoroughly prepared, carefully cast, spoken and (by and large) sung with both style and technical security, its choral and orchestral parts delivered with wonderful verve… Its star is the young tenor Benjamin Bernheim, who takes the title part with exceptional charm, poise and youthful ease of delivery.

The Golden Calf’s replaced by an avaricious beetle, and several of the opera’s Greatest Hits (notably Valentin’s Prayer and the Soldiers’ Chorus) are absent on this snappy, period-instrument account of Faust in its more sardonic and succinct original version, but the pay-offs are many and varied...Bernheim's light-voiced, Dorian Gray-ish hero is idiomatic, elegant and engaging.

It emerges spring-cleaned of 150 years of Victorian accretions and cobwebs in Rousset’s hands...There’s wonderful singing from Benjamin Bernheim as Faust, an immaculate stylist who crowns the famous air Salut, demeure with a perfectly placed high C in voix mixte. Véronique Gens’s lyric Marguerite and Andrew Foster-Williams’s wittily sardonic Méphistophélès are excellent. A revelation.

The original 1859 version sounds spring-cleaned, Victorian cobwebs swept away, in this bracing performance.