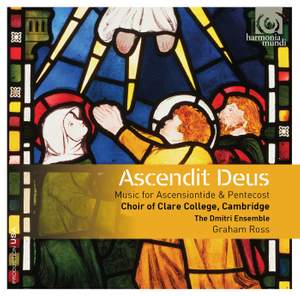 the famous setting of Ascendit Deus by Peter Philips spurts forward like a colt sprung freshly from a stable, the vocal decorations spinning vertiginously round like Monteverdi. It's a bracing... — BBC Music Magazine, April 2015, 4 out of 5 stars More…

Dean, B: Was it a voice? (Music for Ascension Day)

Muhly: Let all the world in every corner sing

Elgar: The Spirit of the Lord is upon me (from The Apostles)

Swayne: God is gone up (A Song for the Ascension)

The Feast of the Ascension, celebrated on the 40th day of Easter, is one of the chief feasts of the Christian year, in which the resurrected Jesus was taken up to Heaven in the presence of 11 of his disciples. The Feast of Pentecost, which falls 10 days after Ascension – seven Sundays (50 days, hence the name) after Easter Sunday – commemorates in the Christian church the descent of the Holy Spirit upon the Apostles. Both feasts are rich in imagery and in musical material. Many of the Ascensiontide works in this programme set all or parts of psalm 47, whose fifth verse begins ‘God is gone up with a merry noise’. 'Ascendit Deus' is a 5-part setting of that verse in Latin by the English Renaissance composer Peter Philips, which leads to a triple-time ‘Alleluia’. Ralph Vaughan Williams’s 'O clap your hands', dating from 1920, sets the opening verses of the psalm, performed here in the composer’s expanded version for choir, organ, brass and percussion. Patrick Gowers, an alumnus of Clare College, is known mainly for his film and television scores, but his double- choir setting of 'Viri Galilaei' is much performed and was written for the ordination of the Bishop of Oxford at St. Paul’s Cathedral in 1987. Graham Ross’s expanded arrangement for choir, organ, brass and percussion receives its world première recording here, alongside four new works, commissioned by Graham Ross and the Choir of Clare College in 2014, also receiving their world première recordings.

the famous setting of Ascendit Deus by Peter Philips spurts forward like a colt sprung freshly from a stable, the vocal decorations spinning vertiginously round like Monteverdi. It's a bracing opening salvo...Amid the muscular Christianity there are welcome oases of reflection. Conductor Graham Ross's Ascendo ad Patrem meum is one of them.

Peter Philips's Ascendit Deus is splendidly bright and vigorous...Nico Muhly's Let all the world, quite unlike the RVW setting, is gentle, almost contemplative; Giles Swayne's God is gone up offers another surprise with its quiet ending. These and the well-known Elgar and Finzi pieces are all beautifully performed by this accomplished choir. Let's hope an Easter disc is on its way.

This is another very fine and varied album from Clare College. The singing is consistently superb in every respect throughout a demanding programme.

This is a very fine choral disc that will bring enjoyment not just at Ascensiontide and Pentecost but throughout the year. The recordings from three different venues all add a spaciousness and breadth with producer and engineer, John Rutter, knowing just what to achieve with a choral sound. There is a beautifully produced booklet that includes colour photographs of various pre-Raphaelite stained glass windows.