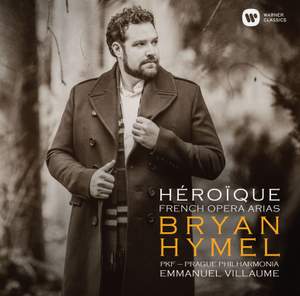 The leading tenor roles of this tradition require facility and strength at the top of the voice plus power and flexibility lower down - all of which Hymel supplies; in fact, he is clearly optimum... — BBC Music Magazine, Awards Issue 2015, 5 out of 5 stars More…

This recital, Héroïque, is tenor Bryan Hymel’s first studio recording for Warner Classics. Its imaginatively conceived programme showcases him in repertoire that he has made his own on stages such as the Metropolitan Opera, Covent Garden and the Bavarian State Opera: opera in French that demands a thrilling heroism in both voice and style – and a top register of outstanding brilliance, since the album offers a grand total of 19 top C’s.

In the space of just a few years, the American tenor Bryan Hymel has become closely identified with the kind of repertoire that is showcased in this recital, his first recording for Warner Classics: opera in French that demands a thrilling heroism in both voice and style. The imaginatively conceived programme showcases his prowess in arias to French texts by Verdi and Rossini, by Berlioz, Meyerbeer, Gounod and Massenet, and by three composers whose works are rarely heard today: Reyer, Bruneau and Rabaud.

On stage, Hymel has gone from Don José in Carmen to Enée in Berlioz’s Les Troyens, the title role in Meyerbeer’s Robert le Diable, Henri in Verdi’s Les Vêpres siciliennes and Arnold in Rossini’s Guillaume Tell.

Hymel’s active repertoire is by no means limited to roles in French – at the Met, he has recently sung Rodolfo in La bohème, while his Prince in Dvořák’s Rusalka led the Financial Times to describe his “lustre and visceral abandon” as “worth travelling continents to hear.” His interpretations of the Prince, Enée and Robert le Diable at London’s Royal Opera House led to his 2013 Olivier Award for Outstanding Achievement in Opera – the Oliviers are the UK’s most prestigious awards in the worlds of theatre, opera, and dance; it complemented another high-profile prize he won in 2013, the Beverly Sills Artist Award, which recognises achievement at the Metropolitan Opera.

As an alumnus of Philadelphia’s Academy of the Vocal Arts, well-known for nurturing exceptional operatic talent, Bryan Hymel was already a rising name when he sang Enée at London’s Royal Opera House in 2012. He had performed the role in Amsterdam in 2010, but in London he was replacing no less a star than Jonas Kaufmann, who had cancelled his entire run of performances. Hymel’s success in Les Troyens at Covent Garden led to another triumph six months later – this time at the Met. It was his debut at the USA’s most iconic opera house and – in an act of true operatic heroism – he was stepping in at the last minute for another major tenor, Marcello Giordani.

The leading tenor roles of this tradition require facility and strength at the top of the voice plus power and flexibility lower down - all of which Hymel supplies; in fact, he is clearly optimum casting for many of these roles today. His French, while not of native standard, is excellent...the choral and orchestral surround is impressive under conductor Emmanuel Villaume, who has a keen instinct for tempo.

Hymel shows off his personal blend of heroism and trumpetingly delivered high notes in this recital.

In this elusive voice type, Hymel has few rivals...[his] distinctive timbre has the veneer of a baritone with a nice medium-size vibrato, though just under the surface is a tenor-esque brightness...Hymel also has keen instincts for building long-term climaxes in this music and making them ring out spectacularly...So he also has the killer instincts of a star tenor.

This beautifully curated and unusual programme explores the development of the French heroic tenor over the course of a hundred years or so..What makes Hymel stand out is that he’s endowed with an almost freakish combination of vocal qualities which hardly ever come together in one singer: sheer horse-power and absolute ease in the highest register...he can pop out top Cs ‘til the cows come home, and in fact there are 19 of them on this disc!

[Énée and Arnaud's] two big arias recorded here display the many glories of Hymel’s voice: its brilliant attack, its dark-timbred middle and lower registers, to which he adds a bright, gleaming top, throwing out high Bs, Cs and C sharps without a hint of effort or fear...Sublime.

Hymel certainly is convincing: his is a vibrant voice with a steely cutting edge, easy-sounding high notes and intense tone...Confirmed French–opera fans should love it, but there is enough variety to grab the uninitiated listener, too.

Mr. Hymel’s muscular, almost metallic voice accomplishes the paradoxical feat of making this grueling music sound simultaneously absolutely secure and death-defying...Hymel goes on to demonstrate he is capable of more than just feats of strength...he makes this warhorse aria ['O Paradis!'] sound like a fresh discovery.

Hymel sings with a clean sweetness of tone and a particular facility above the stave: his French diction is conscientious rather than idiomatic. He can toss off the fireworks...with aplomb, but it is in the intense lyricism of the invocation from Berlioz’s La Damnation de Faust and “Inspirez-moi” from Gounod’s La Reine de Saba that he excels.

The voice is strong, tightly-focused, darkly coloured and unusually even across all registers. He easily manages those “Howzat!” moments up on high that bring many tenor arias to a close. Yet he’s equally expressive shading his voice in his middle pitch, almost cradling the listener with intimacy.