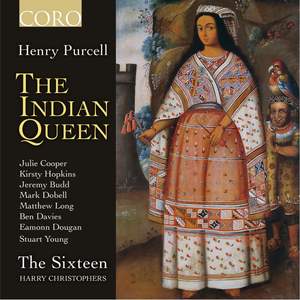 Purcell: Catch - To All Lovers of Music, Performers and Scrapers

Why Should Men Quarrel Here, Where All Possess

By Ancient Prophecies We Have Been Told

What Flatt’ring Noise is This

Symphony: The God of Dreams Rises

Seek Not to Know What Must Not Be Reveal’d

Ah, How Happy Are We

We, the Spirits of the Air

They Tell Us That Your Mighty Powers

Purcell: The Indian Queen, Z. 630, Act V: While Thus We Bow Before Your Shrine

Purcell, D: The Masque Of Hymen

To Bless the Genial Bed with Chaste Delights

Come All, Come All

I’m Glad I Have Met Him

Good People, I’d Make You All Blest if I Could

My Honey, My Pug

The Joys of Wedlock Soon Are Past

Let Loud Renown With All Her Thousand Tongues

Henry Purcell was a brilliant music dramatist and in The Indian Queen there is a plethora of detail, colour and characterisation to be explored in every symphony, air and dance. Purcell's instrumental writing leaps off the page with string writing that is second to none and a wealth of variety capped by exquisite writing for trumpet, oboes and recorders.

Based on Dryden’s play, Henry Purcell’s music from The Indian Queen deals with the conflict between the Mexican and Peruvians and principally with Queen Zempoalla. The Indian Queen is a classic story of love and war and, as with all good stories, things don’t go quite as planned for the eponymous Queen…

There is so much exceptional vocal music to revel in but none better than the extraordinary recitative You twice ten hundred deities for the magician Ismeron which opens Act III, and was described by the historian Charles Burney as “the best piece of recitative in our language”.

Like Mozart and Schubert, Henry Purcell lived all too short a life – he lived just over 30 years – and for that reason it was left to his brother Daniel to complete The Indian Queen. Daniel was no Henry but his final Hymeneal masque allows a little light relief. Act V, which was the last music that Henry wrote, is a perfect Didoesque ending to The Indian Queen proper and just proves how we as music lovers suffer when these geniuses die young.

Christophers leads a trim, affectionate performance of Purcell’s last (unfinished) semi-opera. The musical forces are small and flexible, and though some previous recordings bring more star power to bear among the soloists, Purcell’s bountiful score is never short-changed.

A fine scene for the magician Ismeron...is suavely done by Eamonn Dougan. The band play adroitly in a few curtain tunes and the Overture...High tenor Matthew Long dispatches Fame's 'Begone, curst fiends of Hell' impressively...this is an engaging advocacy of Purcell's final and seemingly incomplete opera.

Jeremy Budd brings his attractive tenor to bear on the role of the Indian Boy, with Kirsty Hopkins’s pretty soprano at his side as the Indian Girl. Matthew Long sounds appropriately more vigorous as Fame, with Eamonn Dougan eloquent in ‘You twice ten hundred deities’ and appropriately sinister in ‘By the croaking of the toad’, both sung by the Peruvian prophet and conjuror Ismeron. Julie Cooper is stylish as the mysterious God of Dreams, Stuart Young sonorous as the Mexican High Priest.

Henry’s music has dwindled to one song, but his contributions are of consistently finer quality...than his relative’s. Christophers has less famous names than Hogwood did (Kirkby, Ainsley, Finley), but Matthew Long, Eamonn Dougan and Julie Cooper’s solos are all outstanding, and their voices blend superbly in the choruses.

It’s a delicious 72 minutes of Restoration wit and lyrical charm, performed gracefully by Harry Christophers’ the Sixteen. There are stirring trumpet tunes, one magnificent bass scene (sonorously delivered by Eamonn Dougan), and fine solos from rising young singers such as Kirsty Hopkins and Matthew Long.