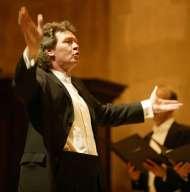 Harry Christophers is known internationally as founder and conductor of The Sixteen as well as a regular guest conductor for many of the major symphony orchestras and opera companies worldwide. He has directed The Sixteen and its orchestra, The Symphony of Harmony and Invention, throughout Europe, America and the Far East. He has performed at some of the world's most prestigious festivals including Salzburg, Mostly Mozart in New York, the BBC Promenade Concerts, the Prague Spring Festival and in Vienna's Musikverein, Sydney Opera House and Tokyo Opera City, gaining a distinguished reputation for his work in Renaissance, Baroque and 20th century music.

As a follow-up to our earlier interview with Harry Christophers, the Scottish composer talks to David about his new work.

David talks to The Sixteen's Harry Christophers about his recording of a brand-new major work by James MacMillan.